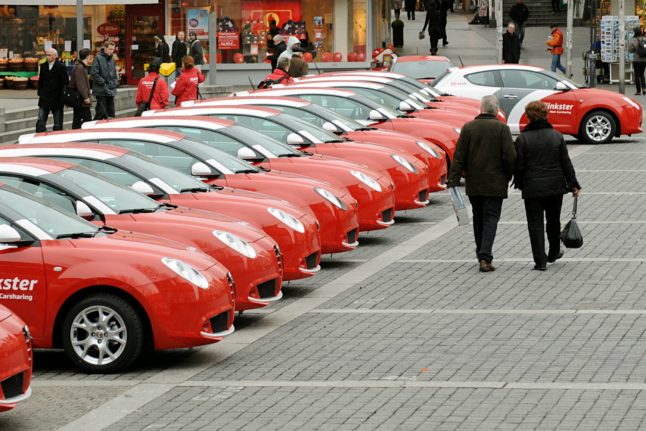 According to the German Car-sharing Association's ranking for 2017, for the third time running, Karlsruhe has the highest proportion of car-sharing vehicles to inhabitants in all of Germany.

As the Statista infographic below shows, in this year's edition of the biennial ranking, Karlsruhe takes the top spot with 2.71 vehicles per 1,000 inhabitants. Stuttgart follows miles behind in second place with 1.47. Germany's biggest cities, on the other hand, sit firmly in the middle of the pack, as Berlin, Hamburg and Munich all have less than one vehicle available to every thousand inhabitants.

Every German city with a population of more than 50,000 was counted but nowhere came close to Karlsruhe.

The Car-sharing Association ranking only took into account the two main services in Karlsruhe: Stadtmobil, the service with the biggest presence in the city, and Flinkster which is run by Deutsche Bahn. Both car-sharing services combined give Karlsruhe a grand total of 834 vehicles in the city.

This number doesn't even include the city's two private car-sharing services Drivy and SnappCar, which members of the public can use to rent out their own cars for money or borrow someone else's for the day.

Important to note though is that the rating doesn't necessarily speak to the quality of the car-sharing in each city. Still, looking at how far Karlsruhe is out front, it's hard to deny the city's success.

So why are the streets in the comparatively small city of Karlsruhe ahead of all the rest?

Spokesperson from the Karlsruhe city office Helga Riedel puts it down to how the network is organized.

“It's no coincidence that the public transport stop plan and the car-sharing station plan are almost identical,” she says. “We have a very good area-wide environmental network which is supplemented by car-sharing.”

This network relies on car-sharing stations around the city, where you can pick up booked cars and return them once you're finished.

One of the advantages of car-sharing – a model of car rental where members of a service can rent vehicles for short periods of time – is that it can be practical for people who only make use of a vehicle occasionally.

Berlin, Hamburg and Munich services are mostly flexible, meaning members can use any car they see and can leave it in whichever space they choose.

But unlike these larger cities, all the car-sharing services in Karlsruhe are station-based, so you can't just drop the car off wherever you like.

This model works well for Karlsruhe's size as, with 160 designated locations across the city, no area is ever left without a car for an extended period of time.

Riedel adds that the success of car-sharing in Karlsruhe is due to of how well the network is laid out – pick up points are often near public transport stops, so it's easy to find your way to and from the car you're loaning.

Other smaller cities like Freiburg, Tübingen and Heidelberg opt for mostly station-based car=sharing and this is perhaps why they all make it in the top ten, despite their smaller size.

Out of the top 20, eight cities have less than 250,000 inhabitants – including Freiburg which is number three on the list.

The city council is planning to increase the presence of car-sharing even more across Karlsruhe; legislature is currently in the works which will allow car-sharing parking spots to be established in public places such as outside shopping centres.