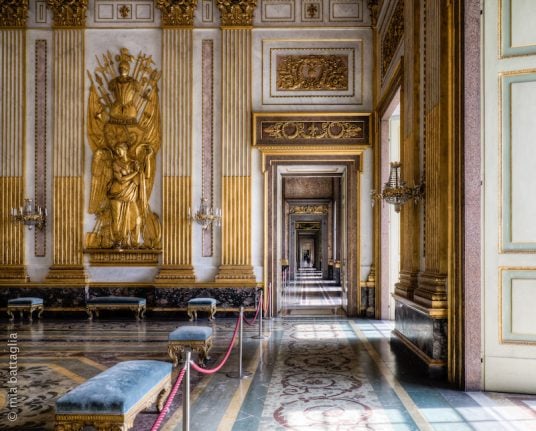 Inside the royal apartments of the Reggia di Caserta. Photo: Mia Battaglia/Flickr

Plaster smashed to the ground on Sunday afternoon above a window in the “ladies’ chamber”, a waiting room next to the queen’s bathroom in the 18th-century Reggia di Caserta, which until recently had a long history of neglect.

Sunday’s collapse is at least the third at the palace in recent years. In 2014, a hole appeared in the roof after a beam gave way, while in 2012 parts of a cornice fell off an outside wall.

No one was hurt in any of the incidents, but this latest collapse raises concerns about the state of the Unesco-listed building, which recently underwent a multi-million-euro restoration.

The cause is not believed to be structural, according to the palace’s director, Mauro Felicori, who said in a statement that the plasterwork in question had been subject to repeated repairs since sustaining earthquake damage in the 1930s. Some of the repair work was inadequate and unsuited to the original materials, he said.

This video via La Repubblica shows the scene immediately after the plaster collapsed.

Restoration will begin shortly; in the meantime the ladies’ chamber has been closed to the public.

From Monday, experts will carry out an in-depth assessment of the palace’s stability using special sensors that monitor its stonework for the least movement, the director said.

Two and a half years of restorations on the palace façade were completed in 2016, paid for by €15 million of European Union funding.

Since the scaffolding came down, the monumental palace – built for the Bourbon kings of Naples on the model of France’s Versailles – has been attracting record numbers of visitors.

It is one of several heritage sites that Italy is seeking foreign funding to maintain, in particular from Chinese investors.