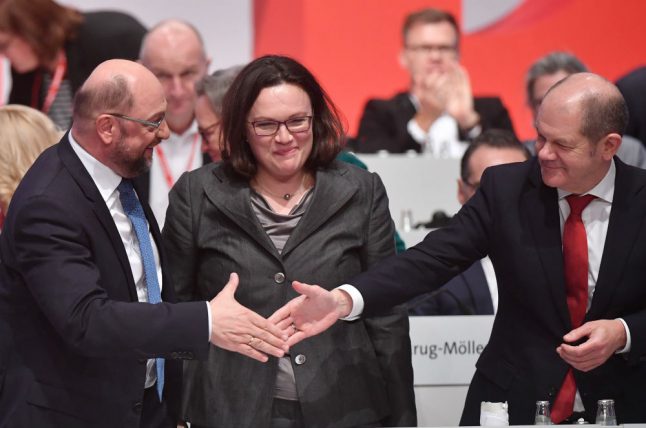 The centre-left SPD approved “open-ended” talks expected to start next week that could lead to either a new right-left “grand coalition”, the toleration of a Merkel minority government or, if negotiations fail, new elections.

Ten weeks after inconclusive polls left German politics deadlocked, SPD chief Martin Schulz had pleaded with his party to give him the green light for such talks, promising to push key demands from improving social welfare to strengthening the European Union.

READ ALSO: The SPD in a Grand Coalition? What you need to know

“We don't have to govern at any price, but we must not reject governing at all costs either,” Schulz told the Berlin congress of 600 delegates, many of whom loathe the idea of once more governing in Merkel's shadow as the SPD has for the past four years.

Schulz, the former president of the European Parliament, vowed to extract a high price if the SPD supports Merkel for a fourth term from early 2018 at the helm of Europe's biggest economy.

He demanded Berlin join French President Emmanuel Macron and other proponents of major EU reforms in boosting the bloc and its currency union, including by raising investment and giving the eurozone a common finance minister and budget.

Schulz was later reelected party chief with almost 82 percent of the vote.

The SPD motion said the party was “aware of its responsibility to our country” and “not indifferent” to whether a new government is formed, but pledged that any government that emerges must drive forward “the fundamental renewal of Europe”.

Many hurdles remain on the road to a new government in Berlin. Whatever the outcome of exploratory and then possible formal coalition talks, any deal will have to be agreed by SPD delegates and, finally, a rank-and-file vote.

Merkel's CDU welcomed the SPD's willingness to talk, with senior party official Klaus Schüler stressing that the goal remained “to build a reliable and stable government for our country”.

In his more than hour-long speech, Schulz made a passionate call for a “United States of Europe” by 2025, arguing that a unified, federal bloc is “the only chance we have to keep up with the other great regions of the world.”

He argued that a strong EU would stop the advance of right-wing nationalists seen in Germany as well as Austria, Denmark, Finland, France and the Netherlands.

“If we don't change course, if we don't strengthen Europe in very practical and concrete ways, then these forces will win,” he warned, condemning the “right-wing radicals and pitiful German nationalists” of the far-right AfD party.

Merkel, asked about Schulz's “US of Europe” proposal, gave a cautious reply.

She said she wanted to help “crisis-proof” the union but said her goal for 2025 was not a federation but better cooperation in fields such as defence, foreign and development policy, education and research and development.

For Schulz, a willingness to sound out a power pact with Merkel represents a U-turn after he repeatedly vowed to go into opposition following his party's dismal showing in the September 24th elections.

At the start of the three-day congress, Schulz faced some fierce opposition from the party's youth wing, which bitterly rejects the humiliating option of the SPD again playing second fiddle in a grand coalition.

Their leader, Kevin Kühnert, warned that, after four SPD election defeats in a row, joining another grand coalition would threaten the very existence of the party, and that the leadership's backflip had sparked “a deep crisis of trust” among the base.

Schulz became the SPD's top candidate a year ago but, after an initial surge in support, led the party to its worst showing since World War II, scoring just under 21 percent.

Schulz apologized but said he could not “turn back the clock”, vowing to drive a rejuvenation of the SPD so “we can do a better job”.