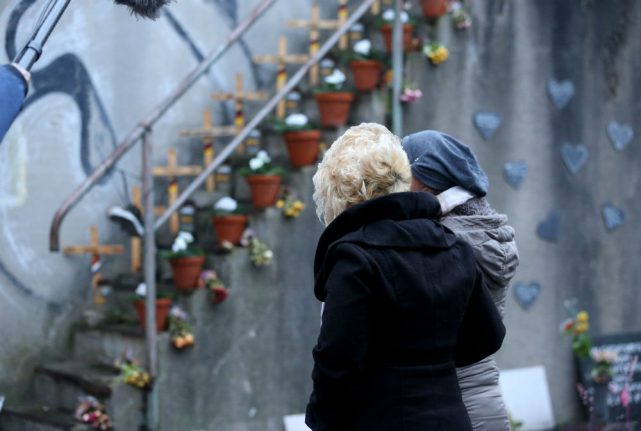 People standing at the scene of the 2010 Love Parade catastrophe on Thursday. Photo: DPA.

Four staff members from the event company Lopavent and six officials from Duisburg city, in western Germany, face charges of negligent manslaughter and bodily harm over the disaster.

Thirteen women and eight men were crushed, trampled to death or suffocated on July 24th, 2010 when panic broke out in a narrow tunnel that served as the only entrance and exit to the techno music event.

More than 650 people were also injured in the stampede that saw victims squashed against fences and walls.

The long-awaited trial is one of the largest criminal cases Germany has ever seen, with the accused being represented by 32 lawyers while survivors, acting as co-plaintiffs, have enlisted nearly 40 lawyers.

The scale of the trial and the huge public interest have forced court officials to move the proceedings to a 500-seat convention hall in nearby Düsseldorf.

“That's what the parents want, and that's what matters most,” he told DPA news agency.

'Respect for the victims'

The trial almost never saw the light of day after a regional court in 2016 dismissed the charges against the 10 suspects, citing of a lack of evidence.

The decision enraged victims' families who have long blamed organizers for the chaotic crowd management and believe the stampede could have been avoided with better planning.

A Düsseldorf appeals court overturned the ruling this year, finally allowing the trial to go ahead.

Prosecutors intend to argue that organizers failed in their duty of care by only providing a single access path that was too narrow to handle the hundreds of thousands of revellers.

If convicted, the accused face up to five years in prison.

It is unclear how long the trial will last but a verdict has to be reached by the summer of 2020 to fall within the statute of limitations.

The 21 victims were aged between 17 and 38 and came from Germany, Australia, Italy, the Netherlands, China and Spain.

The Love Parade started as an underground event in the former West Berlin in 1989 before moving to other German cities, at times drawing over a million revellers.

The 2010 tragedy led organizers to declare that the Love Parade would never be held again “out of respect for the victims”.

People queuing at a a special vaccination campaign at the Ditib Central Mosque in the Ehrenfeld district of Cologne. Photo: picture alliance/dpa | Henning Kaiser

After a painfully slow start, Germany ramped up its vaccination campaign, breaking European records on the number of shots administered to people in one day.

Yet despite all of this, there appears to be a lottery on where things are moving quicker in the country.

Now as Germany gets ready to lift the priority list on June 7th – meaning that all adults will be able to apply for a vaccine appointment, no matter their age, health condition or job – there are worries that not all members of risk groups are being vaccinated.

Although Dortmund, in North Rhine-Westphalia, has opened up vaccination appointments for priority group 3, people aged 60-69, who are also in this group, are not able to book an appointment at a vaccination centre.

They have been invited to “special vaccination” drives using the AstraZeneca vaccine on certain days in April and May but according to Dortmund’s city vaccination plan, this offer has now ended. They were generally available on a first-come-first-served basis and ran out quickly.

“As soon as further vaccine for this group is made available, further appointments may be booked,” says the plan.

That’s the case despite over 60s being able to access a vaccine in many other parts of the country, including Berlin and Baden-Württemberg.

The Local Germany reader Richard, who is 65 and has lived in the Dortmund area since 1999, said he was concerned that people in this age group were being forgotten.

Although priority groups should be able to book a vaccine appointment with their GP, or another doctor, many GPs are not carrying out vaccinations or giving out appointments.

Richard said his doctor told him it wasn’t possible for him to make a vaccination appointment until mid-June when everyone can apply.

“I have followed the requirements and requests of the government in patiently waiting my turn, but with this opening up of applications to everyone on June 7th, I feel that my being a good citizen and not trying to jump the queue as many people have has been thrown back in my face,” he told The Local.

Richard said he is keen to get a jab soon as he suffered from severe bronchial asthma until he was 14 which means he still gets shortness of breath when he catches a cold. Furthermore he suffers from panic attacks and works in the live music business which may require full immunisation for travel when it gets back on track.

“It seems that many Germans think that the healthy 60+ category is already being inoculated, but in Dortmund that is simply not the case; as of this morning, it is still not allowed to book an appointment.

“With under three weeks until the doors are thrown wide open, I am really concerned that I and every healthy fair-minded 60+ person are now being forgotten.”

The Local contacted the North Rhine-Westphalia health office for a comment.

Why is there such a lottery when it comes to getting the vaccine in Germany?

Despite a clear acceleration of vaccine delivery in Germany, there are still people who belong to ‘risk’ priority groups who have not been vaccinated yet.

Other readers of The Local have also reported that they’ve struggled to find information or get an appointment even though they qualify for a shot.

This could be down to bureaucratic failures in states or local regions when trying to secure appointments. It’s also not particularly helpful that each area in Germany has a different way of doing things, and processes change at short notice.

The vaccine rollout in Berlin is different to neighbouring Brandenburg, and so on.

Another factor is the behaviour of people. It appears you are more likely to get a vaccine if you push for it, or have the time and resources to contact lots of different doctors – but Health Minister Jens Spahn has urged people not to put pressure on medical staff.

You might know a person with a contact for a vaccinating doctor, or you might be lucky enough to receive an appointment from your own doctor, be it a GP or a specialist.

This points to a long-standing problem with Germany’s organisation of the vaccine rollout: it isn’t very logical, and a lot of it depends on luck.