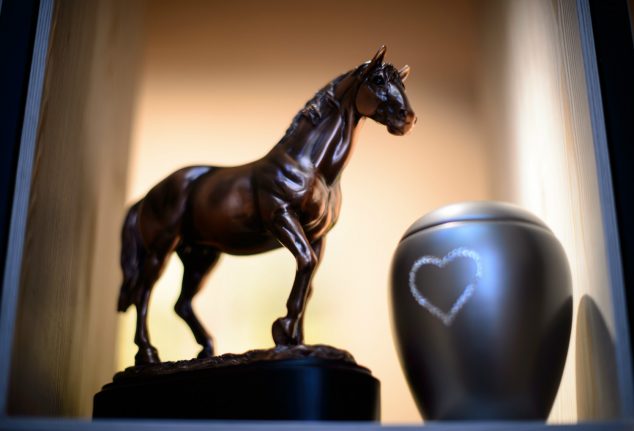 A horse figurine at the crematorium. Photo: DPA
With its modern wooden cladding, the house on the edge of a forest at Schwäbisch Hall could be mistaken for a spa. But the building has a rather more sombre purpose – the approximately 1,000 square metre facility in Baden-Württemberg is Germany's first horse crematorium.
“When a human dies, there are clear rituals. Common mourning and funerals make it easier to say goodbye. But up until now something like this has been missing for horses,” says Sandra Lutz, the business woman behind the project.
Lutz has been running a regular human crematorium since 2003 – and with her husband Joachim she now runs the facility for horses.
“Human relationships with animals have changed,” she explains. “Nobody wants them to be ground into dog food after their death. For many people, animals are almost a family member – owners want a fitting farewell.”
Lutz hopes to meet these needs by offering the bereaved a ceremony with candles and music. There is also a farewell room, where they can look through a glass window at the furnace system. The furnace. Photo: DPA
According to the Federation of Animal Undertakers, the crematorium in Schwäbisch Hall is the first of its kind in Germany. The only similar facility was a horse graveyard on Norderney, a small North Sea island which existed until the 1970s. The final resting place was closed due to a tightening of the law on the disposal of animal carcasses, but has now been reopened for small animals.
For the Lutzs, building a horse crematorium wasn't cheap. They say they invested around €2.5 million in the project. The Emission Protection Act required that they build a large filter system as cremation of a horse can take up to eight hours.
Cremation also comes with its costs for the owners, who foot a bill of between €1,999 and €3,500 – plus the transfer of the deceased. The couple picks up the carcass with a special vehicle, after all a dead horse cannot be transported in the trunk.
The good news is that, while German law forbids people form taking human remains home, the animals' ashes may be put on the mantel piece.
The Federation of Animal Undertakers claims that there is an increasing demand for animal burial services in Germany.
“For many people, an animal was a close companion that you don't just want to bury,” says the association's chairman Martin Struck. He says that the new facility “allows people to say a worthy farewell. You don't want to bury a horse just anywhere.”
For Struck, the logical next discussion is over whether humans should have the right to be buried alongside their animal. Current German law complicates this. But there is certainly historical precedent. It was Frederick the Great's final wish to be buried at Sanssouci Castle in Potsdam next to his greyhounds.