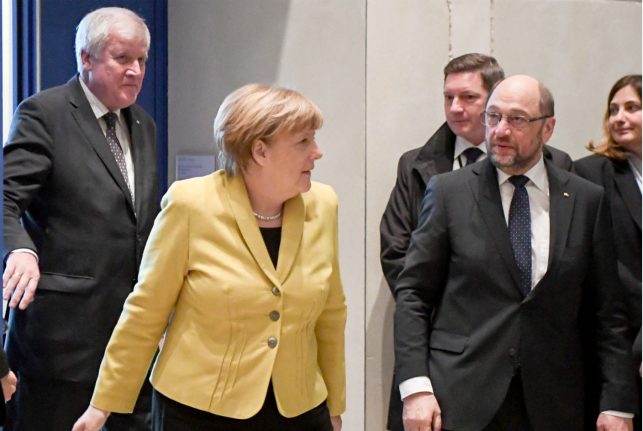 Held at the invitation of President Frank-Walter Steinmeier, the talks at 8 pm Thursday will explore if both sides are ready to launch negotiations on forming Germany's next government.

After September's elections left Merkel without a majority, the SPD had stubbornly ruled out renewing an alliance with her as it suffered a humiliating loss at the polls.

But as Merkel's bid at forming a coalition with the ecologist Greens and pro-business FDP fell apart, the SPD came under pressure to relent and avert snap elections.

Spiegel weekly noted that Thursday's meeting, which also ropes in Horst Seehofer – the leader of Merkel's Bavarian allies – was crucial for the veteran leader.

“For Merkel, it's a fight for political survival that's starting,” said Spiegel weekly.

“Merkel must do everything to forge this alliance – the only one that would ensure stable power,” it added.

But the talks are clouded by a political storm sparked this week by a member of her conservatives, Agriculture Minister Christian Schmidt, who flouted the government's line by voting in favour of approving a disputed weedkiller during an EU meeting.

The action, which Schmidt said he took unilaterally, was condemned as a “breach of trust” by the SPD, which has been junior coalition partner in Merkel's cabinet since 2013.

Anything but snap polls

With Merkel now wooing the SPD, Schmidt's action could come at a high price for the conservatives.

“It will weigh on the talks, no question about that,” said Carsten Linnemann, who leads the CDU's federation of small and medium-size companies.

SPD chief whip Carsten Schneider told broadcaster ARD that the episode showed “Madame Merkel does not have her shop under control”.

And even if Schulz has agreed to sit down with Merkel, he has remained non-committal about the prospects of another grand right-left coalition.

Party rank and file will still discuss “the complete range of possible options” when they hold a congress next week, before deciding whether to open exploratory talks with Merkel's conservatives, said Schulz.

This could include the option of backing a minority government led by Merkel.

“It is possible that the country ends up with a constellation that it has never seen in its (post-war) history,” said the SPD leader in a tweet.

Merkel has excluded the minority government option due to its inherent instability.

But some German media quoting unnamed sources have reported that she now prefers the option to holding snap polls, if talks fail with the SPD.

For now, leading Social Democrats are sounding a cautious note on the chances of another grand coalition for Germany.

Schneider said another four years as junior partner in Merkel's government is “a result that I still do not see”.

The party's deputy chief Ralf Stegner also told broadcaster Bayerische Rundfunk that “in the end, our members will decide… how it will go, is very, very open”.

If the sentiment of the SPD's youth wing is anything to go by, a new partnership with Merkel will be a tough sell.

Kevin Kuehnert, who heads the “young socialists”, urged Schulz to reject extending the lease of the grand coalition.

“I get the feeling from party members that there is absolutely no one who wants a grand coalition,” he told broadcaster SWR.