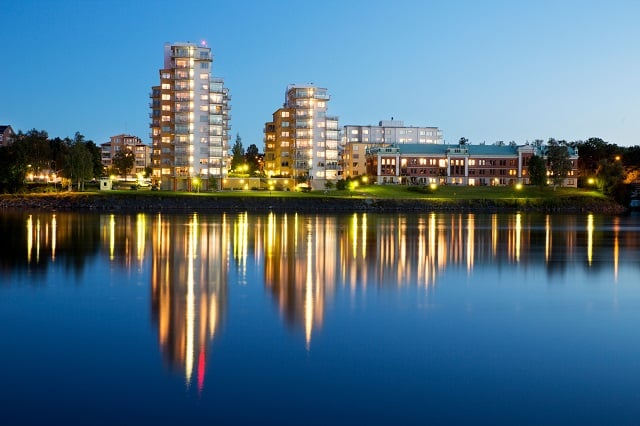 The decision comes after a years-long legal battle to have the Sami name for the city, Ubmeje – which means 'roaring river' – officially recognized.

“Of course I'm disappointed, but not surprised,” Michael Lindblad, the chairperson of Såhkie Umeå Sami Association told The Local. He described the decision as “lazy”  and said that authorities had based their decision on “old beliefs and old research”, rather than taking into account more recent findings related to Sami language and names.

“The history of the Sami people has not been fully recognized and researched, so the authorities argue that the name Ubmeje was used to refer to the area from a remote position, not by people who lived here. But the Sami way of life was nomadic, so this doesn't make sense,” said Lindblad.

Umeå municipality submitted the application to Lantmäteriet, the Swedish land registration authority, in 2012, asking for the Sami name Ubmeje to be included in the authority's geodata, meaning it would appear on maps and could be used on signage too.

Two years earlier, the Umeå municipality was included in the administrative area for the Sami people, meaning that Sami people in the area were entitled to use their native language in contact with local authorities, as well as to have preschool or elderly care offered in the Sami language. There are currently 19 such areas across Sweden.

Another reason for the application was the fact that Umeå was named the European Capital of Culture for 2014, as well as the practical reason that the name Ubmeje is already used in the names of several organizations.

The Sami people are indigenous to Sweden and other parts of Scandinavia, where they have lived since the last Ice Age over 10,000 years ago. In parts of Norway and Finland, Sami street signs already exist, but the idea is relatively new in Sweden. Public service broadcaster Sveriges Radio began programming in Sami languages in 1952 – 13 years after it launched programming in English and German.

However, Lantmäteriet took advice from the Swedish Institute for Language and Folklore, which recommended that the name Ubmeje not be used in signage. This was based on a 2009 study, which concluded that the city of Umeå was not part of the Ume Sami region.

The land registration authority followed their recommendation and denied the application, but in 2013 the municipality appealed. Now, the Ministry of Enterprise and Innovation has rejected this appeal.

Peter Steggo, a minorities coordinator at the municipal council, told Sveriges Radio that he would investigate the possibility of appealing the decision again, but Lindblad said the Såhkie Association would continue to use the city's Sami name in any case.

“There will be a time when authorities will have to recognize [Sami names], but it takes time because not a lot of research of Sami history has been done in this area,” he said. “We will continue to use the name anyway, and will continue to talk to the municipality about it.”

Further north-west in Sweden, local politicians in the tiny town of Arjeplog (Árjepluovve in Sami) have been  campaigning for Sami street signs, and in November last year the municipal council (kommunfullmäktige) agreed.

That decision was dependent on the change being financed externally, and Swedish Liberal party member Lars-Nila Lasko, who campaigned for the change, told The Local at the time that he expected the project to take two to three years to come to fruition.

OPINION: 'What happened to the Sami in Sweden should be common knowledge'

The skeleton came from a Sami from the village of Arjeplog in Sweden’s northernmost Norrbotten county, who was serving a life sentence at Stockholm’s Långholmen prison when he died. The skeleton had been on display at Gustavianum, Uppsala University’s Museum.

“The government has today decided that Uppsala University should be able to return human remains, in the form of a mounted skeleton, to the Arjeplog Sami association,” the government said in a press release.

“The university’s request has been prompted by a request from the Arjeplog Sami association requesting the repatriation of the remains. Uppsala University has determined that Arjeplog’s Sami association has a legitimate claim on the remains and that the association will be able to ensure a dignified reception.”

Sweden’s universities and museums have been gradually returning the Sami remains and artefacts collected in the 19th and early 20th century when research institutes such as Uppsala’s State Institute for Race Biology, sought to place Sami below ethnic Swedes through studying eugenics and human genetics.

Lund University returned Sami remains earlier this year, and in 2019, the remains of more than 25 individuals were returned by Västerbotten Museum to Gammplatsen, an old Sami meeting place on the Umeå River in southern Lapland.

Mikael Ahlund, chief of the Uppsala University Museum, said that the skeleton was one of “about 20 to 25” that the museum had been given responsibility for in about 2010, when the university’s medical faculty was clearing out its old collections, and had never been put on display.

He said it was “a bit unclear how these remains were collected and how they were used”.

“It’s a complex history at the end of the 19th century, with teaching anatomy. They also had a connection to the ideology of the period, the idea of races and the different anatomy of races, so that’s the dark shadow of that period.”

In a press release last November, Margaretha Andersson, the head of Uppsala’s Museums, said that in 1892, when the man died, there was nothing strange about prisons donating the bodies of dead prisoners to university medical departments.

“In the old days, it was not unusual that the bodies from people who died in prison were passed to the university’s medical and research departments,” she said.

Ahlund said that the museum had always been willing to return the skeleton to the Sami association, but that there had been bureaucratic hurdles to doing so.

“What you need to know is that we are Swedish government institution, so we can’t just repatriate them as we would like ourselves, it needs to be a decision from the government, which is what happened today.”

He said that the skeleton would be delivered to Arjeplog “as soon as possible”. “We expect it to happen early autumn, or something like that.”