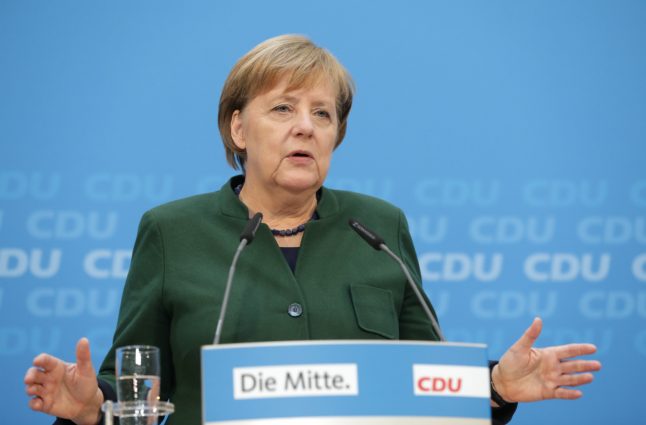 After huddling with leaders of her Christian Democratic Union (CDU) in Berlin, Merkel told reporters that her party was ready to hold serious talks with the centre-left SPD to form Germany's next government.

Merkel has been struggling to form a coalition after elections in September left her without a majority in parliament.

As the SPD refused initially to renew an alliance with Merkel's conservatives, the chancellor had sought to partner up with the pro-business FDP and the ecologist Greens.

However, those talks collapsed, lurching Germany into a political crisis and raising the spectre of snap elections.

With the SPD now relenting, Merkel said there is “now an offer to talk, we mean it seriously”.

“Not only do we have diverse problems in Germany, but there are also great expectations in Europe for answers to pressing questions,” she said.

EU partners like France were impatiently waiting for Berlin to “take a stance” on reform proposals for the bloc, she said.

“Also given the conflicts in the Middle East, the situation with Russia, the situation in the United States, I think it would be good if Germany is capable of taking action,” she said.

“And that's why we are ready to take on talks with the SPD. Just as we have undertaken exploratory talks that were serious, engaged and honest with the FDP and the Greens, we are ready to do the same with the Social Democrats,” she said.

In a separate press conference after a meeting with SPD top brass, the party's leader Martin Schulz also signalled a readiness to negotiate.

“If the president asks us to hold talks on Thursday, then I think I would say yes,” said Schulz, referring to a meeting with Merkel called by President Frank-Walter Steinmeier — who holds the power to call new elections.

However, Schulz sounded a cautious tone, saying that party rank and file will still discuss “the complete range of possible options” during a congress next week, before deciding whether to open exploratory talks with Merkel's conservatives.

As recently as last week, the Social Democrats' leader had stridently ruled out governing for another four years in Merkel's shadow.

Schulz had opted to have the SPD lead the opposition, arguing that the electorate — which handed his party a historic low score — had voted the previous grand coalition out of office.

But as Germany faced protracted political paralysis and possible new elections, the SPD reversed its stance.

Schulz revealed that he had also received a text message last week from Greece's leftist Prime Minister Alexis Tsipras who encouraged him not to turn his back on a new coalition.

Echoing Merkel's warning on Europe, Schulz noted that it was “clear that at the moment, all of Europe is looking to Berlin” on future EU reforms.

Despite the rapprochement between left and right, Germany is still unlikely to see a government for weeks, if not months.

Julia Kloeckner, deputy chief of Merkel's CDU, said formal negotiations with the SPD are unlikely to begin before 2018, after the labour party holds its congress next week, followed by the Christmas break.

Public opinion appeared to be in favour of a new grand coalition, with Bild am Sonntag newspaper putting support at 52 percent.

But in a sign of tough talks to come, Environment Minister Barbara Hendricks of the SPD accused the conservatives on Monday of going behind her party's back in Brussels over EU approval for the disputed weedkiller glyphosate.

EU states on Monday renewed the licence for five years after Germany suddenly dropped its opposition.

Hendricks wrote to the conservative agriculture minister, Christian Schmidt, that the move ignored the SPD's stance on the issue.

“Those interested in building trust between partners in talks shouldn't behave this way,” she said.