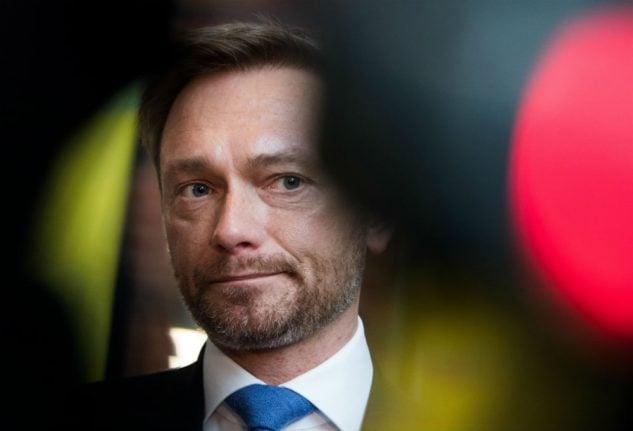 Meet Christian Lindner, 38, who led the electoral comeback of his pro-business Free Democrats (FDP) but was Monday widely accused of irresponsible showmanship and a grab for the right-wing populist vote.

In the early hours, Lindner stepped before the TV cameras and declared an end to over four weeks of painful coalition talks that had followed on from inconclusive September 24th elections.

The marathon negotiations with Merkel's conservative bloc and the left-leaning Greens – over sticking points from migration and climate policy to taxes and finance – had failed, he declared unilaterally.

“It's better not to govern than to govern badly,” Lindner said, a line his party then almost immediately inserted into their pink-and-yellow Twitter banner, looking like its first campaign slogan for possible new elections.

Merkel's conservatives, their Bavarian CSU allies and the Greens were briefly united in shock, all declaring that they had been close to a compromise deal when the FDP pulled the pin.

The move threw a new light on Lindner's repeated warnings that he was “not scared of new elections”, and on his hardening stance against Green demands, notably to allow more refugees to reunite with their families.

The Greens' Robert Habeck charged that Lindner's move “was prepared long ago” and that he had subjected all sides to “psychological terror” before finally imploding the fragile talks.

The opposition Social Democrats' Heiko Maas, the outgoing justice minister, agreed that the FDP had used the talks merely “as a stage” in a show of “selfishness that harms our democracy”.

Lindner's statement suggested his party was too deeply wedded to its promises and principles to agree to any questionable compromises.

But his fellow negotiators, and many commentators, didn't buy it, noting that Lindner's tone had hardened on migrants, a flashpoint issue after Merkel's government allowed in more than one million asylum seekers since 2015.

With popular debate in Germany shifting to the right, many believe Lindner is trying to snatch votes from the anti-immigration Alternative for Germany party (AfD), which scored almost 13 percent in the election.

The Frankfurter Allgemeine Zeitung daily said the FDP was now going after voters “who have turned their backs on the CDU and Angela Merkel but couldn't bring themselves to vote AfD”.

The Sueddeutsche Zeitung commented that it was remarkable that the conservative CSU had complained of being “overtaken on the right” by the traditionally liberal FDP on the refugee issue.

“Maybe Lindner believes he can rise all the way to the top like this, like Sebastian Kurz in Austria,” it said, referring to the 31-year-old conservative chancellor.

The Greens' co-leader Cem Ozdemir suggested similarly that “the FDP has been looking a bit too much at Austria recently, and not enough at Germany”.

Lindner himself enjoyed a stunning electoral success, almost single-handedly reviving the FDP after it embarrassingly crashed out of parliament in 2013, having withered in Merkel's shadow as junior coalition partner.

The campaign, which relied heavily on slick black-and-white photos of a stubble-faced Lindner, earned the party 10.7 percent.

Now, even before Lindner takes his first seat in parliament, he has thrown Europe's biggest economy into a period of uncertainty that threatens the political future of its veteran leader Merkel.

Germany now faces weeks if not months of paralysis, followed by likely elections that are expected to further boost the AfD, Monday's only winner.

Its leader Alexander Gauland claimed the collapse of talks proved that “Merkel has failed”.

On the FDP, he said that Lindner appeared to be copying his party's policies but gloated that “we're the original”.