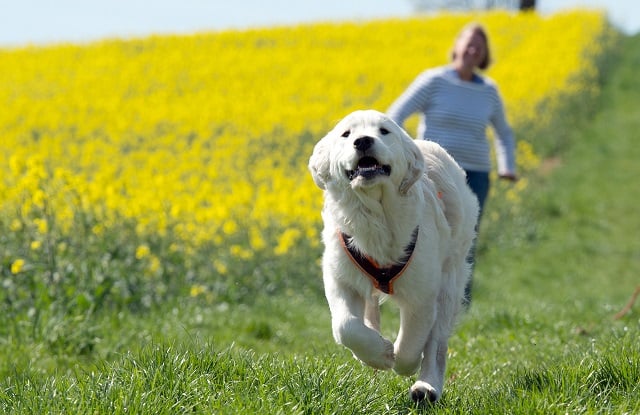 Golden retrievers, like the one pictured, are one of the best breeds for your health. Photo: Bernd Weissbrod/dpa, via AP/TT

Scientists examined data relating to Swedes aged between 40 and 80, who in 2001 (when registration of dog ownership was first made obligatory) had no history of cardiovascular disease.

Over the next 12 years, dog owners had a lower risk of death due to cardiovascular disease or other causes than those without a dog, according to the study's results.

The effect was particularly pronounced among people who lived alone, with dog-owners in single-person households having a 33 percent reduction in mortality and an 11 percent reduction of a heart attack compared to people living alone who did not own a dog.

“This was one of the most interesting findings: we see that dogs have a larger impact in households without other humans,” Tove Fall, the study's senior author and an associate professor at Uppsala University, told The Local.

“This could be because if you're the sole dog owner, you get more physical activity, and it could also show that dogs help alleviate stress from loneliness.”

The finding demonstrates the important role dogs could play in Sweden, where a high proportion of the population, especially among the elderly, live alone.

“In Sweden, we're not so good at talking to people we don't know, and a dog could help with that; it's an ice-breaker for interaction with other humans,” Hall added.

READ ALSO: Why this Swedish restaurant is launching a menu for dogs

Researchers from several Swedish universities and Stanford University produced the study using the personal numbers (the Swedish equivalent of a social security number) of 3.4 million individuals. These numbers are issued to every resident in Sweden, and are used to record hospital visits and dog ownership.

There are several possible reasons for the positive effects dogs appear to have on their owners' health, though the study did not look into this specifically.

“One potential reason is the effect on microbiomes. Lots of people think that nowadays we have poor diversity in microbiomes, and it might be that dogs have a positive effect on this by bringing in dirt and bacteria,” Fall said.

“And people who get dogs might be different from non-owners in other ways before they choose to get a dog, which could have influenced our results, for example they might already be more interested in physical activity or have a higher level of health.”

The effect also varies across different breed groups, according to the study's findings, with owners of larger, more active breeds drawing the most health benefits from their canine pals. The breeds with the strongest positive effects on owners' health were the retriever group, including golden retrievers and labradors, and pointing breeds.

So what consequences could the study have on Swedish society?

“I hope that there will be a higher acceptance of dogs in society,” said Hall. “It's not so easy to combine dogs with an active work life and they aren't always allowed in places, so the study could help us to understand that dogs are really important for their owners, and for example be more understanding if someone's dog passes away.”