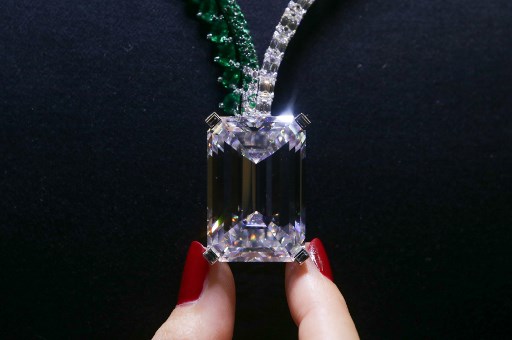 The rare D diamond. Photo: Daniel Leal-Olivas/AFP
The 163.41-carat flawless D colour diamond, suspended from an emerald and diamond necklace called The Art of Grisogono, sold for 33.5 million Swiss francs ($33.8 million, 28.7 million euros), after taxes and commissions, at the Christie's autumn jewel auction.
This marks “a new world-record price for a D colour diamond at auction,” Rahul Kadakia, auctioneer and head of Christie's international jewels division, told AFP.
D is the highest colour grade attributed to a diamond, indicating that the stone is completely colourless, and thus extremely rare.
With a drawn-out round of rapid-fire bidding starting at 20 million francs, the necklace was finally sold to a telephone bidder, who wished to remain anonymous, for well above the asking price of 25 million.
'Masterpiece'
But some had expected The Art of Grisogono, which Christie's described as a “masterpiece of unparallelled beauty and exquisite workmanship”, to fetch even more.
“I am disappointed that the Art of de Grisogono didn't sell for a more dazzling price,” said Tobias Kormind, head of 77 Diamonds, a large European online diamond jeweller, who had said before the sale he thought the price might top $50 million.
The flawless, D colour 11A type diamond was cut from a 404 carat rough rock which was discovered in February 2016 in the Lulo mine in Angola — the 27th biggest rough white diamond ever discovered.
The rough was analyzed in Antwerp and cut in New York, where a team of ten diamond-cutting specialists were involved in mapping, plotting, cleaving, laser-cutting and polishing the giant rough rock into a polished, flawless diamond.
A team from Swiss luxury jeweller de Grisogono then created 50 different designs around the 163.41-carat diamond, before opting for an asymmetric necklace with the stone as its centrepiece.
The left side of the necklace is made up of 18 emerald-cut diamonds and the right side composed of two rows of pear-shaped emeralds.
French royal diamond
Another highlight of Tuesday's auction, a large pink diamond once set in the crowns of numerous French kings and emperors, including Napoleon, meanwhile sold for far more than the $6-9 million estimate.
It went under the hammer, again to an unidentified telephone bidder, for 12.5 million francs, with the final price tag after taxes and commissions ticking in at 14.4 million francs ($14.5 million, 12.3 million euros).
The gem was named after Cardinal Mazarin, an Italian cardinal and diplomat, as well as a great art collector, who served as chief minister under Louis XIII and Louis XIV, and who bequeathed it and other diamonds to the Sun King in his will.
The pink stone, originally dug out of the ancient mines of Golconda in south-central India, sparkled on the crowns of Louis XV and Louis XVI, who was guillotined during the French Revolution.
And it graced the crown of Napoleon I, Napoleon III and Empress Eugenie, among others.
It has since passed through the hands of famous French jeweller Frederic Boucheron and later the Baron von Derwies.
Christie's said the seller was a private collector, but did not reveal their identity.
Tuesday's sale marked the first time the diamond appeared at auction in 130 years.
It has been auctioned off once before: It was among the French Crown Jewels sold off in 1887 — 17 years after France's Second Empire collapsed and Napoleon III and his wife Emperess Eugenie sought exile in England, leaving their jewels behind.
Christie's jewel auction, which raked in sales totalling 105.4 million Swiss francs, will be followed on Wednesday by a similar auction at Sotheby's.
The highlight of that show, also in Geneva, will be The Raj Pink, the world's largest known fancy intense pink diamond, which Sotheby's is aiming to sell for $20-30 million.

The pearl and diamond pendant were the centrepiece of Wednesday's auction. Photo: AFP

The Sotheby's auction at an ultra-luxurious hotel on the banks of Lake Geneva saw feverish bidding for a 10-piece collection owned by the ill-fated queen, featuring jewels unseen in public for two centuries.

The 10 items, which had been estimated to fetch a total of roughly $3 million, sold for a combined sum of nearly $43 million, Sotheby's said. The 'Queen Marie Antoinette Pearl' (C) with other jewellery from the 'Royal Jewels from the Bourbon Parma Family' collection. Photo: AFP

But the highlight was the pendant featuring an oval diamond and drop-shaped pearl, which Sotheby's said went to an anonymous, private buyer, without giving further details.

“Marie Antoinette's pendant is simply irreplaceable and the price it fetched is about far more than the gem itself,” Eddie LeVian, the chief executive of jewellers Le Vian, said in a statement.

“It captures everyone's imagination,” he added.

“This is the ultimate proof, if it were needed, that the world's ultra high net worth individuals love rare, natural fancy coloured diamond and pearls jewels as investments, and especially those with royal provenance.”

Marie Antoinette's treasures were the centrepieces of a sale featuring 100 jewels held by the Italian royal House of Bourbon-Parma.

Sotheby's, which had billed the event as one of the most important royal jewellery auctions in history, said the night did not disappoint.

The 100 lots earned a total of $53.1 million – compared to a pre-sale estimate of $4.2 million – a performance that bested a previous record set in 1987 when Sotheby's sold a collection of jewel's once held by the House of Windsor.

Marie Antoinette, who historians say was reviled by much of the French public over her lavish spending in the midst of a national financial crisis, was guillotined in Paris in October 1793 at the age of 37.

After her death, her jewels followed a winding path highlighting European power dynamics in the 18th and 19th centuries.

According to accounts written by the queen's lady-in-waiting, Madame Campan, Marie Antoinette spent an entire evening in the Tuileries Palace wrapping all her diamonds, rubies and pearls in cotton and enclosing them in a wooden chest.

They were sent to Brussels, governed by her sister Archduchess Marie-Christine, before being sent on to the French queen's native Austria, and into the safe-keeping of her nephew, the emperor.

In 1792, the royal family was imprisoned in Paris. The king and queen were executed the next year, and their 10-year-old son died in captivity.

Only their daughter, Marie Therese of France, survived. She was sent to Austria in 1796, where she was given her mother's jewels.

She had no children herself, but passed on the treasures to her niece and adopted daughter, Louise of France, Duchess of Parma, who in turn left them to her son, Robert I (1848-1907), the last ruling Duke of Parma.

They have been privately owned by relatives ever since.