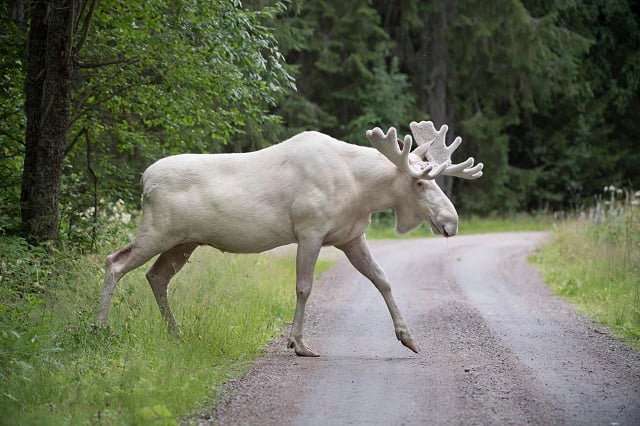 The white elk grabbed global headlines this August after it was caught on camera by a local councillor, Hans Nilsson, in the Värmland region in western Sweden. But as The Local reported on Monday, it is at risk of being put down, after police said that it had charged at a woman who was out walking her dogs.

Tens of thousands have now rallied to save the elk. More than 20,000 people had signed a petition by Sweden's largest animal rights organization, Djurens rätt, by the end of Monday – five hours after its launch.

“It is the fastest-growing petition we have ever had,” a spokesperson for the organization, which was founded in 1882 and has more than 40,000 members, told The Local on Tuesday.

Djurens rätt said in a statement: “We urged the authorities in Värmland to withdraw the decision to shoot the elk. This is a wild animal that has reacted in a natural way – then being punished with death is not how we should be treating wild animals.”

The decision to cull the animal was taken last week by police, though hunters will first try to chase it away from the residential area. If that doesn't work, they will have to shoot it, Arvika police chief Christer Lööf told hunting magazine Svensk Jakt.

“Some people who live in the area don't go out because of the elk, for example older people with walkers who cannot get away when the elk comes close to them,” Lööf explained. “This is not a pet, although many people seem to think so. The elk may seem tame, but it retains its natural instincts.”

Another petition started by Nilsson himself on Monday had collected more than 10,000 signatures by Tuesday afternoon, calling for Swedish authorities to spare the elk's life.

“I could turn myself into a human shield for the elk, even though I can't make myself quite that big,” the Eda councillor vowed, speaking to Värmland regional newspaper VF.

His footage of the rare creature was shared thousands of times on social media in summer after being picked up by global media outlets including the BBC and National Geographic.

But the animal's viral fame brought unintended consequences, with experts forced to warn sightseers to keep their distance after people flocked to the area to catch a glimpse of it.

“It's very sad when you have seen the problem for a long time,” local nature photographer Ingemar Petersson told The Local on Monday. “The decision [to shoot the elk] has been taken because he is aggressive, but I have never experienced that.”

“There is a lot of pressure on the area, and many photographers have behaved badly, but the elk is not aggressive,” he added.

White elk can be explained by two conditions: one is albinism, while the other is leucism, a genetic variation which changes the colour of the skin and fur but unlike albinism, does not change the eyes. It is estimated around 50-100 other white elk live in the Värmland region.

READ ALSO: Is it an elk or is it a moose?