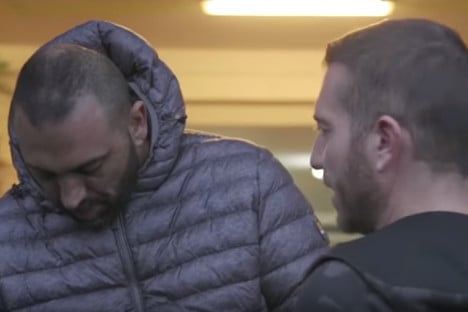 In a statement, Rai said: “On Tuesday journalist Daniele Piervincenzi and filmmaker Edoardo Anselmi were violently attacked by Roberto Spada, a member of the Spada family, well-known in the media for various judicial investigations, and another man”.

Piervincenzi suffered a broken nose after being headbutted by Spada, the brother of mafia boss Carmine Spada, before being chased and attacked with a baton.

He was attacked after questioning Spada outside the boxing club he runs about his alleged support of the far-right extremist group, Casapound.

Spada, who has faced corruption and drug smuggling charges, accused the crew of repeatedly ignoring his request to refrain from responding before “forcing their way into a members-only club, interrupting a session and frightening my son.”

The attack was condemned by Rome mayor Virginia Raggi as well as the deputy head of Casapound, Simone Di Stefano, who said the group had nothing to do with the Spada mafia clan.

“Roberto Spada is not a member of CasaPound. We share nothing with him, apart from attendance at a kid's party in a piazza 18 months ago,” Di Stefano was quoted by Ansa as saying.

Meanwhile, Interior Minister Marco Minniti said the incident was being investigated “because the principles of law and order are fundamental, and there can be no no-man's land in Italy.”

Piervincenzi has asked for an apology from Spada.

“If he apologises I'm ready to forgive him, but he should apologise to Ostia, where the high crime rate and the clans have spoiled the social fabric of a beautiful place,” he told Ansa.

A show on Italian public television advised women on how to be seductive at the supermarket. Screenshot: Detto Fatto, Rai 2.
Viewers took to social media to express their anger and disbelief after the “Detto Fatto” show on Rai offered a tutorial on pushing a supermarket trolley while wearing high heels, instructed women on the most “sensual” way to pick up items dropped on the floor, and offered tips on seducing fellow shoppers.

Italian TV never misses a beat in terms of outrageous content. This time, a tutorial for women on how to be sexy at the supermarket – because where else would a woman spend her time? ? https://t.co/Vr2hbh15Db

Many pointed out the poor timing of the episode, aired just before the International Day for the Elimination of Violence against Women on November 25th.

“If this is what public television thinks it should teach women, we are troubled as a society,” wrote another Italian Twitter user.
“As a woman I would not have participated in this farce. As a TV viewer I have mixed feelings: disgust for the show, shame for the broadcaster, anger because I pay the license fee,” commented another.
Many social media users from outside Italy questioned whether  the clip was real, or a parody.

The public broadcaster announced it would be investigating how and why the segment was allowed to be aired, after government ministers asked for an explanation from the channel’s management.
“How long must we continue talking about women in a fake, stereotypical way, with stiletto heels, sexy movements, always perfect, mermaids or witches?” asked Italy's agricultural minister Teresa Bellanova on Twitter.

“Obviously I’ve begun an investigation to ascertain responsibility and we are evaluating the future of this programme,” Rai’s CEO Fabrizio Salini said in a statement to the media on Wednesday
He said the segment had “nothing to do with the spirit of the public service and with the editorial line of Rai.”
SHOW COMMENTS
Url copied to clipboard!