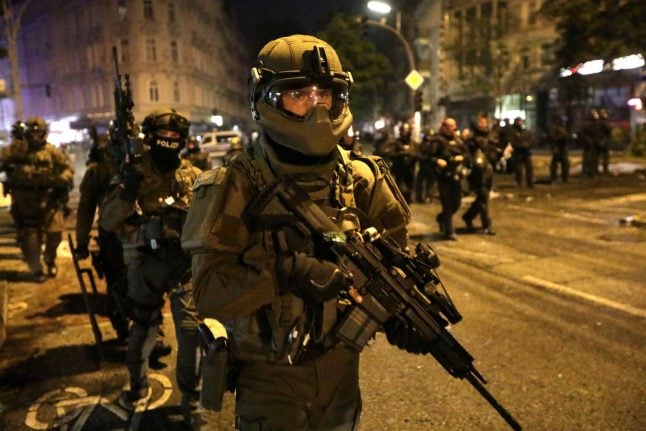 Police used an MZP 1 multipurpose pistol to shoot rubber bullets on 15 occasions and tear gas on a further 67 occasions during rioting in the port city between July 6th and July 8th.

Hamburg authorities insist that the weapon is technically a pistol which they are permitted to use to maintain domestic security. But a Finance Ministry document seen by Spiegel classifies the guns as a banned combat weapon.

The maker of the weapon, Heckler & Koch, also told Spiegel that the MZP 1 is not classified as a pistol, but rather as a grenade launcher.

Ulrich Karpen, a legal expert at Hamburg University, said that the law does not permit for the use of the MZP 1 pointing out that it does not appear on a comprehensive list of weapons which the police are allowed to use.

Die Linke (the Left Party) are now considering filing a legal complaint against police commander Hartmut Dudde, who was in charge of the operation. Die Linke claim he broke German law on the use of combat weapons by authorizing the use of the MZP 1.

According to Spiegel, Hamburg police said before the summit that they would use neither tear gas nor rubber bullets against protesters, but justified the change in tactic through the extreme escalation in violence.

Rioting began in Hamburg on Friday July 6th and continued until the Sunday. Black bloc protesters burned cars and smashed in the windows of shops in several parts of the city, causing several million euros worth of damage.

Police won initial sympathy after 500 officers were injured in clashes with masked protesters. Subsequently at least 35 investigations were launched into alleged crimes by officers against demonstrators, most of which were assaults.

Critics accuse the police of deliberately escalating the violence by intervening in a protest on the Friday night when some demonstrators refused to obey an order to remove face masks.