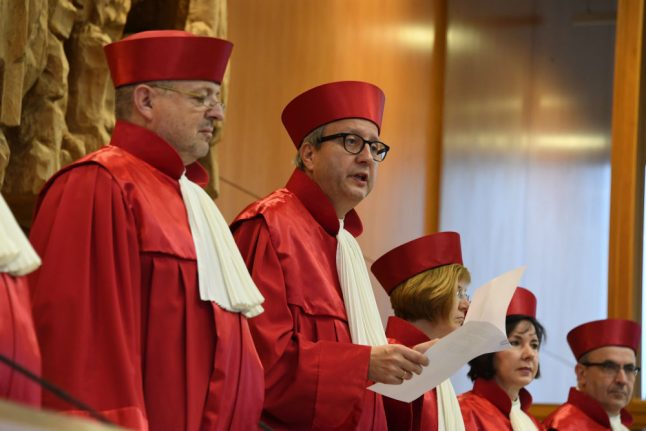 File photo of the Constitutional Court in Karlsruhe: DPA.

Judges in the Constitutional Court in southwestern Germany said that the government violated the rights of MPs and the Bundestag (German parliament) by failing to give sufficient information to questions posed by Green party MPs.

In the court ruling on Tuesday, judges also said the federal government is obliged to answer parliament’s questions publicly, because otherwise the Bundestag would not be able to “uncover violations of the law and similar grievances in government and administration.”

The case was triggered by the Green party and its MPs in 2010. Back then, they had made inquiries with the federal government regarding clarification of the banking crisis and the monitoring of financial regulator BaFin.

Green party members of parliament had also inquired about delays and investments having to do with Deutsche Bahn and had demanded information on economic efficiency calculations for Stuttgart 21, a construction project in the capital of Baden-Württemberg worth billions of euros.

According to the ruling, the federal government refused to provide information on financial market supervision of BaFin before and during the banking crisis, from 2005 to 2008. The Greens had wanted to know to what extent managers of banks threatened with bankruptcy received salaries and bonuses of more than half a million euros from rescue funds.

But the federal government only either partially answered these questions or completely refrained from responding and referred, among other things, to the sensitivity of the financial markets.

The federal government said they were obliged to maintain confidentiality with regard to internal company information.

But the Constitutional Court has challenged this, stating that the government failed to recognize its duty to respond.

Moreover, the court deemed the federal government’s reference to a possible loss of confidence in individual financial institutions as insufficient.

Without far-reaching constitutional safeguards, effective opposition work in the German parliament and thus public supervision of the government would not be possible, Voßkuhle added.