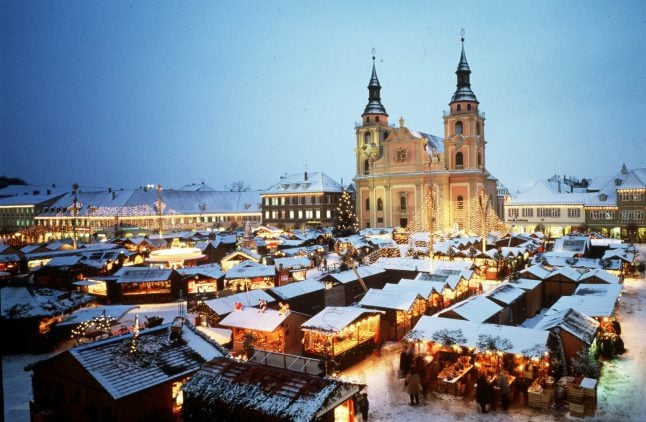 DOM Festival in Hamburg is North Germany's biggest public festival and takes place next to the famous St. Pauli stadium. Coinciding with three of the seasons (spring, summer and winter), the festival has taken place three times a year since 1948. The winter edition runs for a month and starts on November 3rd.

Thrillseekers and traditionalists alike can find something which suit them; the festival has an array of rides and roller coasters to choose from and there's plenty of different food stalls that cater to appetites ranging from peckish to completely ravenous.

If you fancy trying out a traditional German fairground snack, pick up Schmalzkuchen at a vendor. Schmalzkuchen, literally translated to “lard cakes”, are like a smaller more square version of a doughnut, although nowadays they contain less lard and more oil so they're a tad more healthy than they sound (but only a little).

Entry is free and if you go on a Wednesday there are discounts on the rides and roller coasters. On Fridays there's even a weekly fireworks display at 10:30pm.

If you're an avid jazz fan then Berlin is the place to be early this November as Jazzfest is back again for 2017, approximately a century after the first jazz records were made. The festival, which has been happening in Berlin for more than 50 years, draws in famous jazz musicians from around the world for a jam-packed schedule of concerts.

This year, the festival features musicians such as Gebhard Ullman, Angelika Niescier and Nels Cline, as well as the festival's first ever artist in residence, Tyshawn Sorey, the New York-based composer, drummer and bandleader. Deep in rural Bavaria, you won't be hard-pressed to find a local version of this festival. For more than 500 years, people have celebrated the day of St. Leonard of Noblac's commemoration in Old Bavaria and Western Austria.

To celebrate St. Leonard, there is a procession of horses and carriages in his honour, as St. Leonard is the patron saint of farm animals. Through the procession, locals hope to honour the role horses play in the burden of farm work, or rather the role they played in a time before tractors.

The aim of the procession is to visit churches consecrated by St. Leonard but once this is done, celebrations continue into the evening with live music and dancing.

Our personal recommendation is to see the procession in Kreuth to the south of Munich, as the Kreuth's Leonhardi Procession (or Leonhardifahrt) is the oldest in Bavaria, with the first recorded Leonhardifahrt taking place in 1442. Although the main Cologne carnival isn't until next year, on November 11th the celebrations will officially kick off in style. At exactly 11:11am on the 11th, carnival season in Cologne officially begins with a colourful and musical celebration, which draws in around 70,000 carnival-goers from around the world.

The official festival programme doesn't start until the afternoon but from 9am people start to take to the streets with music, dancing and, of course, outrageous costumes. Celebrations officially wind down around six, but, thanks to carnival parties hosted by local pubs and bars, festivities go on late into the night. If you have a hankering for something a bit festive then check out the eclectic Tollwood festival in Munich this winter. Held in Theresienwiese, the same place as Munich's Oktoberfest, this festival has a range of quirky entertainment, including cabaret, theatre and a special performance from Cirque Éloise.

Foodies can check out the “Market of Ideas” which is a market of 50 food stalls serving food – including organic options – from all over the world. There's also lots on offer if you are a vegetarian or a vegan. The themes of ecology, tolerance and internationality have been at the heart of the festival since it began, as well as the mission of culture for all. For this reason, 70% of the events at each Tollwood festival are free. If you just can't wait until December to get all Christmassy, the Baroque Christmas Market in Ludwigsburg gets going on November 23rd, a whole week before the markets usually get going. The town, famous for its annual pumpkin festival, hosts a traditional baroque-style market every year in its picturesque marketplace.

With more than 170 old fashioned stalls selling mulled wine, gingerbread sweets and decorations, amoung other things, the market has a traditional German feel. The town's two Baroque churches are lit up on the edge of the market every year and the stalls are arranged as they would have been in the Baroque era.

Open daily from 11am to 9pm, the market also has a daily programme for children including a puppet show, magicians and clowns. Celebrating Jewish culture in all its forms, the Days of Jewish Culture have become an important part of Berlin's cultural scene since it began 30 years ago. The festival was launched in 1987 as part of the celebrations of the 750th anniversary of the founding of Berlin and has continued to flourish since then.

The week kicks off with an opening in the Rykestraße Synagogue and events range from theatre performances, religious services and readings, to concerts, heavy metal and a DJ from Tel Aviv.