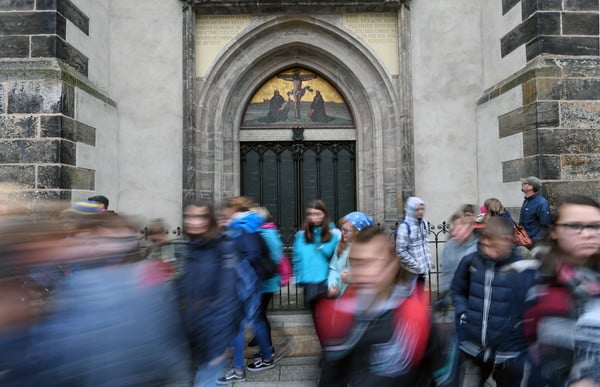 The door of the All Saints' Church in Wittenberg on which Martin Luther is thought to have posted his 95 Theses. Photo: DPA

The bas relief sculpture at the heart of the dispute dates from around 1300 and is one of Germany's last remaining examples of vulgar anti-Jewish folk art that was common in Europe during that era.

The graphic stone image shows Jews suckling the teats of a sow as a rabbi looks intently under its leg and tail. The hateful symbolism is that Jews obtain their sustenance and scripture from an unclean animal. Many churches in the Middle Ages had similar “Judensau” (Jewish pig) sculptures, which were also aimed at sending the stark message that Jews were not welcome in their communities.

However its prominence on the facade of the Stadtkirche (Town Church) in the eastern German town of Wittenberg derives from the importance of the building, where Luther, himself a notorious anti-Semite, preached two centuries later.

It was in Wittenberg that Luther is said to have nailed his 95 theses to another church's door in 1517, leading to a split with the Roman Catholic Church and the birth of Protestantism.

The theologian argued that Christians could not buy or earn their way into heaven but only entered by the grace of God, marking a turning point in Christian thinking.

But Luther also came to be linked to Germany's darkest history, as his later sermons and writings were marked by anti-Semitism — something that the Nazis would later use to justify their brutal persecution of the Jews.

'Dark side of past'

Marking the 500th anniversary of the Reformation, German Chancellor Angela Merkel, herself the daughter of a Protestant pastor, said it was essential that Luther's anti-Semitism never be scrubbed from his theological legacy.

“That is, for me, the comprehensive historical reckoning that we need,” she said in her weekly video podcast on Saturday.

Tens of thousands of Christians from around the world have descended in recent months on Wittenberg, the town of 47,000 inhabitants 100 kilometres (60 miles) southwest of Berlin.

Meanwhile a loose coalition of activists has seized on the anniversary to argue that the sculpture in its current location, where Luther first preached in German, remains a dangerous symbol of intolerance.

A petition started by British theologian Richard Harvey calls for the sculpture to be removed from the public sphere and displayed in a museum.

“It's so outrageous, obscene, insulting, fear-making — it is something that I protest in the strongest possible terms and if there's any way — human, physical, spiritual or whatever — to change it, let's do it,” Harvey, a self-described Messianic Jew, said in a video posted online.

The appeal has collected more than 8,000 signatures so far.

However the Wittenberg church's own congregation and the city council argue that it should be maintained and adopted a resolution to that effect in June.

They note that a bronze plaque laid in 1988 in the pavement next to the church points to the horrific legacy of virulent anti-Jewish sentiment, making the ensemble a vital historical relic.

“We are convinced that history means not forgetting the dark side of the past but confronting it,” the church's pastor Johannes Block told ZDF public television.

“It would be historically incorrect to remove the sculpture,” agreed professor of education Micha Brumlik, who is leading a local movement to maintain the image.

He told AFP the best solution would be to expand the adjacent memorial against anti-Semitism, which was installed under communism, to more fully place the “Judensau” sculpture in context.

“Out of respect for what happened later to the Jews, you have to provide a more complete explanation,” he said.

To call attention to their cause, Brumlik and fellow activists have held rallies on Wittenberg's main square and read out anti-Semitic texts penned by Luther.

The protest followed silent weekly gatherings at the same site in Wittenberg over the past year in which participants held up signs against the sculpture including one reading: “After Auschwitz, is it necessary to have the 'Judensau'?”

While similar sculptures have gradually vanished in Europe, “Judensau” remains a common anti-Semitic slur used by neo-Nazis in Germany.

The controversy comes against the backdrop of the far-right Alternative for Germany (AfD) winning nearly 13 percent of the vote in last month's general election and entering parliament for the first time.

The Islamophobic and anti-immigration party's local branch has seized on the debate to advance its own agenda.

In its own petition calling for the status quo to be maintained, the AfD wrote that “those who have a problem with Jews today” are primarily people “of Arab-Muslim origin”.