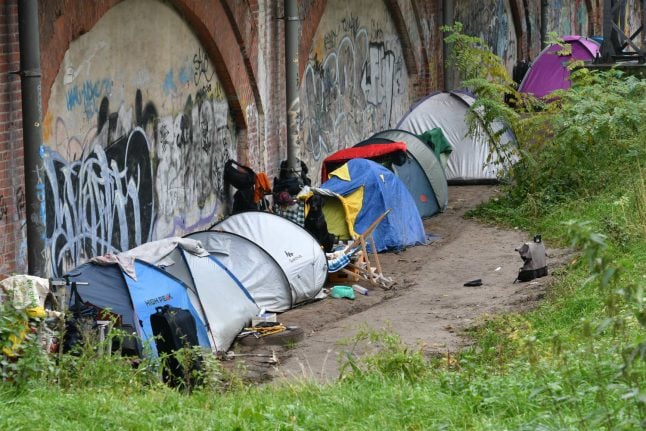 “We can’t accept that new homeless camps are developing with 30 or 40 people living in them. The answer can’t be: let the poor people have their place to sleep,” said Franziska Giffey, mayor of the Neukölln district, on Tuesday.

Berlin keeps no official statistics on the number of homeless people in the city. But estimates by charities which provide food and shelter suggest that the numbers have risen sharply in recent years. And, with homeless shelters full, many people are camping out in the city parks.

Giffey, a member of the centre-left Social Democrats (SPD), said that “all our resources need to be put together – like in the refugee crisis” in order to help homeless people make it through the winter.

But she was also clear about what should happen afterwards.

“If you can’t afford to live in Germany, you need to go back to Romania,” she stated.

Giffey is not the first Berlin politician to talk tough on homelessness in recent weeks. Earlier in October, Stephan von Dassel, mayor of Mitte and a member of the Green party, said that the more aggressive eastern Europeans living on German streets should be deported.

“The Polish government shouldn't solve its social problems in our parks,” he complained, after the murder of a woman in the Tiergarten park shone a light on rising criminality there.

There are currently between 60 and 80 people camping in the central Tiergarten park, according to local authorities. Von Dassel complained that the people who were camping in the park acted aggressively to public order officers who approached them and described the park as “a zone of illegality.”

Von Dassel faced criticism from party colleagues who pointed out that his suggestions did not comply with European law. People can only be deported within the EU under extreme circumstances, such as if they pose an immediate danger in the country they are in.

The Berlin senate has responded by setting up a task force to deal with homelessness in Tiergarten and increased the police presence in the wooded park.

According to a report in the Berliner Morgenpost on Wednesday, the Berlin senate has now decided to clear Tiergarten of all the people who are camping in it. Police officers have already approached homeless people, warning them about the impending action and taking their identifications. The measure follows similar clearances of camps in the Friedrichshain-Kreuzberg district, Tagesspiegel reports.

Not all of the measures Berlin is taking are punitive, though.

The city senate’s department for social affairs has funded the building of a health advice centre for homeless people in west Berlin to the tune of €80,000. The centre is set to open in 2018.

Districts are also trying to encourage homeless eastern Europeans to go home by paying for their bus tickets. According to Tagesspiegel 110 people were persuaded to go home in this way last year.

But critics have nonetheless argued that the city senate has lost control of the situation.

Stefan Evers, general secretary of the Christian Democrats in Berlin stated that the senate is “pretending that the influx of eastern European fleeing poverty isn't happening.”

He urged the city's left-wing coalition of SPD, Die Linke and the Greens to build more social housing in the capital to deal with the problem.

“I have the impression that the senate is internally pushing the problem between different departments,” Thomas Seerig, of the Free Democrats, told the Berliner Morgenpost, claiming that the state authorities were leaving districts in the lurch.