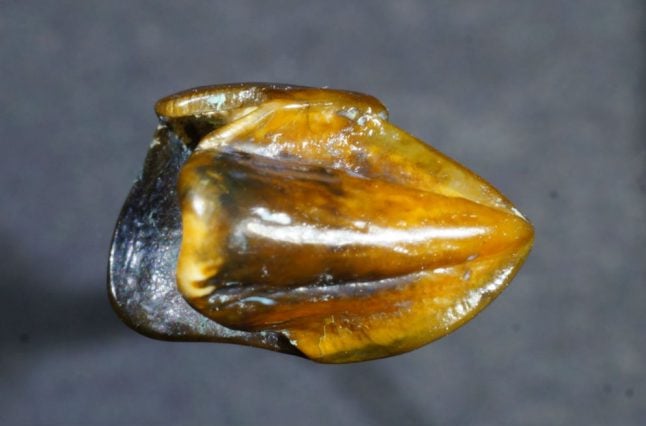 One of the teeth which was found in the excavation. Photo: DPA.

News of the sensational discovery was only made public recently since the team who dug up the ancient teeth in the town of Eppelsheim wanted to be sure the find was as significant as they had initially believed.

“It's completely new to science, and it is a big surprise because nobody had expected such a tremendous, extremely rare discovery,” Herbert Lutz, head of the excavation team at the Natural History Museum in Mainz, told Deutsche Welle.

Lutz had been digging at the site in Eppelsheim for 17 years where the Rhine River used to flow, excavating riverbed sediments approximately 10 million years old. the area is “well known in science” and famous for its primate fossils.

At the end of 2016, as his team decided to finally wrap up the excavation, “just in the last second, these two teeth came to light. We really weren't expecting such a tremendous discovery,” Lutz said.

Both teeth are completely preserved, too. The teeth look “excellent” and are “shining like amber,” though no longer white, Lutz said.

The 9.7 million year old canine tooth and upper molar – found only 60 centimetres apart and thus believed to belong together – resemble those of great apes who lived in Africa 2.9 to 4.4 million years ago. According to Lutz and his colleagues, the teeth closely resemble some extinct African relatives of humans.

Since the official unveiling of the teeth, global media outlets have been questioning whether the find is capable of rewriting human history, since it seems to go against theories of human beings originating from Africa.

The teeth are unlike anything found in Europe and Asia, Lutz cautiously claims.

“It’s a complete mystery where this individual came from, and why nobody’s ever found a tooth like this somewhere before,” he said in an interview with Research Gate.

But some experts say that the teeth hardly “force us to reexamine the theory that humans originated from Africa,” arguing that the fossils “more likely belonged to a very distant branch on the primate family tree,” reported National Geographic.

Other experts state that whether the teeth really belong to the hominoid classification (apes, chimpanzees, etc.)  is questionable.

Expert on the teeth of humans’ extinct relatives and paleoanthropologist at the University of Toronto, Bence Viola, says the molar found contradicts any case for a human connection.

“I think this is much ado about nothing,” he told National Geographic. “The molar, which they say clearly comes from the same individual, is absolutely not a hominin, and I would say also not a hominoid.”

The majority of the experts National Geographic spoke to said the molar found likely belongs to a species of an extinct, primitive branch of primates that lived in Asia and Europe between seven and 17 million years ago. 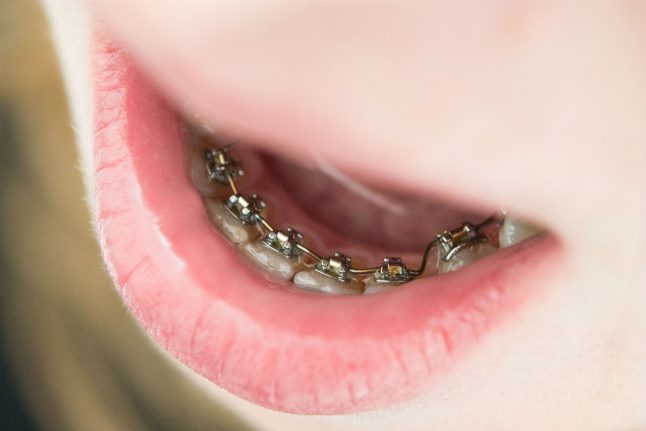 A child with braces. Photo: DPA

The research conducted by the IGES Institute in Berlin concluded that “with regard to the diagnostic and therapeutic orthodontic measures, no conclusion can be drawn about a patient-relevant benefit.”

SEE ALSO: German healthcare – everything you need to know

In layman’s terms, the meta-study, which examined all previous studies into the health benefits of orthodontic treatments, came to the conclusion that braces and similar measures to alter tooth structure have no proven health benefits.

The report said it was “noticeable” that none of the long term studies into the benefits of braces had collected data on their impact on tooth loss, periodontitis and other secondary diseases.

While no benefits to dental health could be found, the report noted that patients believed that aesthetic benefits of straighter teeth improved their quality of life.

With German health insurers paying an estimated €1.1 billion in 2017 alone for orthodontic treatment, the conclusions could put pressure on federal authorities to reassess whether braces are a necessary health measure. If they were struck from the list of necessary treatments, insurances companies would no longer be legally obliged to pay for them.

Pushed onto the back foot by its own report, the Health Ministry said that while the study showed there was no proof that orthodontic treatment has health benefits, “it also does not rule it out”.

Health Minister Jens Spahn said on Thursday that he had “no doubts about” the necessity of orthodontic treatment.

The ministry also stated that it was not its job to rule on what is and is not a necessary health treatment. This is a duty carried out by the Federal Joint Committee, a body of health experts that includes doctors, dentists and insurers.

The ministry said it would now “discuss further research needs and recommendations for action” with insurers and medical experts.