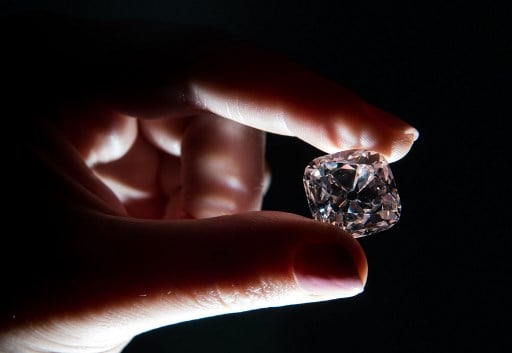 Photo: Chris J Ratcliffe/AFP
“Le Grand Mazarin”, a 19.07-carat light pink diamond, was a gift to Louis XIV in 1661 and was set in the crowns of almost all of the monarchs and emperors of France who followed, Christie's said.
The diamond is “a timeless symbol of beauty, a French royal treasure adorning no fewer than seven kings and queens beginning with the Sun King Louis XIV,” Christie's chairman for Europe and Asia Francois Curiel said in a statement.
“Above all, it is a witness to 350 years of European history. This stone belongs to a class of its own,” he said.
The gem was named after Cardinal Mazarin, an Italian cardinal and diplomat, as well as a great art collector, who served as chief minister under Louis XIII and Louis XIV, and who bequeathed it and other diamonds to the Sun King in his will.
The pink stone, originally dug out of the ancient mines of Golconda in south-central India, sparkled on the crowns of Louis XV and Louis XVI, who was guillotined during the French Revolution.
And it graced the crown of Napoleon I, Napoleon III and Empress Eugenie, among others.
It has since passed through the hands of famous French jeweller Frederic Boucheron and later the Baron von Derwies.
Christie's said it was currently part of a private collection, but did not reveal the name of the owner.
The auction house said it hoped to rake in $6.0-9.0 million (5.1-7.7 million euros) for the diamond.
When it appears at the Christie's Magnificent Jewels Auction in Geneva on November 14th, it will mark the first time it goes under the hammer in 130 years.
It has been auctioned off once before: It was among the French Crown Jewels sold off in 1887 — 17 years after France's Second Empire collapsed and Napoleon III and his wife Emperess Eugenie sought exile in England, leaving their jewels behind.