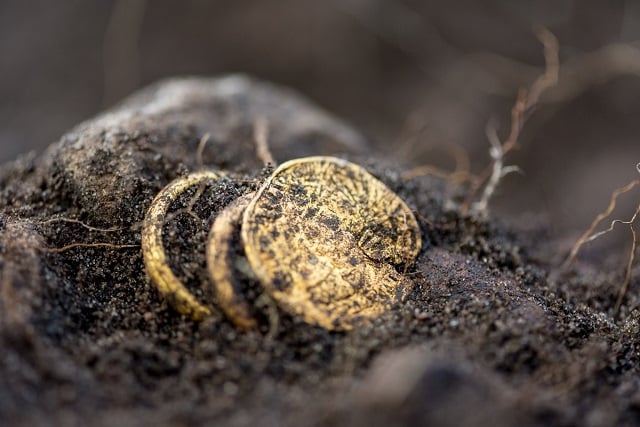 The team working at Sandby Borg, a ringfort on Öland off Sweden's south-eastern coast, said the discovery was the “find of the year”.

Archaeologists Clara Alfsdotter and Sophie Vallulv last week uncovered two rings and a coin, which confirm a theory that the island was in close contact with the Roman Empire. Close by, the team found pieces of Roman glass in an area which was once an important house.

The coin was made in honour of Western Roman Emperor Valentinian III, who ruled between 425 and 455. The emperor is depicted on one side of the coin, with his foot resting on the head of a barbarian – a common motif in coinage from the period. A similar coin commemorating Valentinian III was found three years ago. The rings are equally interesting. Their size suggests they belonged to a woman, despite the fact none of the many skeletons found in the area have yet been identified as female.

“We haven't found treasure like this before, though we have found jewellery deposits,” Helena Victor, the project leader, told The Local. “It's always exciting to find gold – the team will always remember this day. It's also important because we now know a lot more about the house where they were found. It seems to have had a special purpose, and it may have been the house of a chieftain or a minor king.”

Victor said Sandby Borg is an exciting site for archaeologists, because of the large number of skeletons which cover the area and are thought to be victims of a fifth-century massacre. “The bodies are lying as they were left, so there were no burials and it's a moment frozen in time,” Victor explained.

“This discovery could help explain why the massacre took place – maybe these people had too much gold and jewellery. Archaeology is all about finding out about people, with a very long-term perspective, so we can also compare these finds to violence we see nowadays, and use them to discuss for example why humans are so brutal and hateful,” she added.

The discovery happened during the final week of this year's excavations in Sandby Borg, where Kalmar's county museum has organized digs each year since 2011.

Now, the rings and coin will be cleaned up by specialists and compared to those found in past digs on Öland, before being put on display in the museum's exhibition. Archaeologists were still working on the excavations on Wednesday, but Victor said they did not expect to strike gold again.