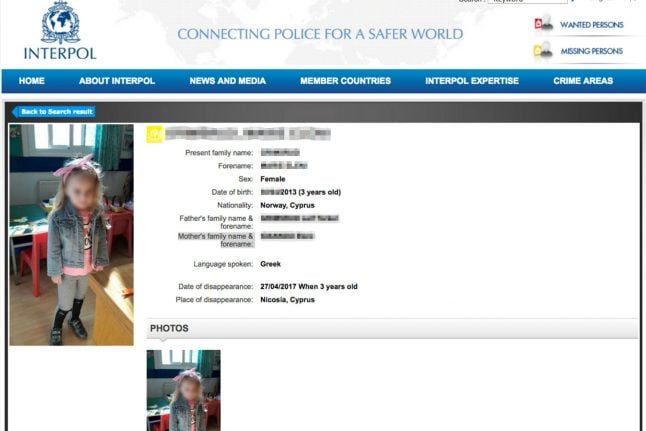 Interpol released information about the Norwegian-Cypriot girl after she was kidnapped on Cyprus in April. File photo: Interpol / NTB scanpix

The child was snatched in Nicosia on April 27th as her Greek-Cypriot mother dropped her off at nursery school.

Four men were later arrested but the girl could not be found. The father, who was registered as living in Norway, was suspected of having ordered the kidnapping and was wanted on a European arrest warrant.

“The father of the child turned himself in yesterday (Monday),” a Norwegian police official in charge of the case, Anette Sveen, told AFP.

The man was arrested, accused of gross negligence of a child. Police will determine whether to place him in custody after questioning him.

His lawyer Mette Yvonne Larsen, quoted in Norwegian media, said he had turned himself in because the child's mother “has agreed to begin a dialogue about a future cooperation regarding the child, which stipulates that the child would have contact with both parents.”

“As for the child, she has been handed over to child welfare services and will be reunited with her mother in the coming days,” Sveen said.

In August, an Oslo court ruled that the child was to be turned over to the mother.