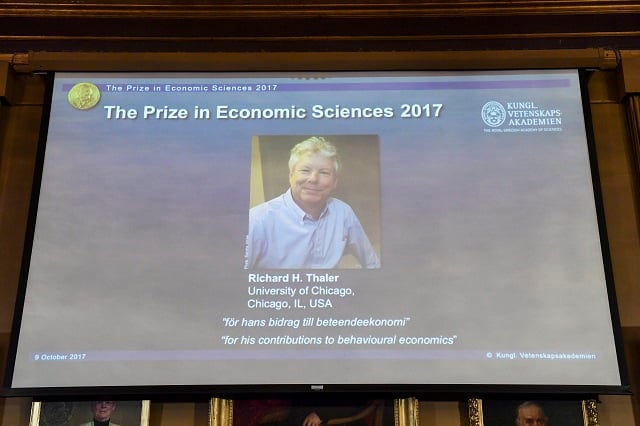 Why are we so bad at keeping New Year's resolutions and why did so many Swedes close their Nordea accounts after the banking giant moved its headquarters from Stockholm to Finland?

Because we lack self-control and we have a keen sense of fairness which takes precedence over purely rational decisions.

Read our interview with Magnus Johannesson, of the Stockholm School of Economics and the Royal Swedish Academy of Sciences, here.

INTERVIEW: Why behavioural economics can protect you against marketing tricks

The Local's Emma Löfgren has just spoken to Magnus Johannesson from the Stockholm School of Economics.

Responding to a question on Richard Thaler being a pioneer in his field, Johannesson said: “I think it's been groundbreaking work. When he started his research in the 1980s, economics was dominated by the standard model based on rational consumers with no self-control problems at all. Between then and now this has changed a lot. Now behaviour economics is a major field of economics.”

We'll have the full interview with Johannesson on the site soon.

If you're interested in learning more about Thaler's work, further information can be found on the Nobel Prize website.

In the video below, Per Strömberg from the Prize Committee sums up the impact of Thaler's research.

“Richard Thaler’s findings have paved the way for a new field in economics” – Per Strömberg on the impact of the 2017 Laureate’s research. pic.twitter.com/VXOC5wiSRN

The Nobel Prize for Economics includes a 9 million kronor prize – so how does Thaler plan to spend it?

“I will try to spend it as irrationally as possible!” says Thaler, when asked if he will act “humanly” when it comes to the prize.

Thaler's work looks at self control and social preferences in economics, and in particular why people often succumb to short-term temptation rather than persevere with long-term goals such as saving for retirement or making healthier lifestyle choices.

So if you've had trouble keeping New Year's resolutions or saving for the future, this lecture by Thaler could be useful.

An AP journalist has pointed out that this is the second year in a row with no female winners of any of the Nobel Prizes, and that the Economics prize has only ever been awarded to one woman.

The Academy's Göran K. Hansson says they are very proud of all the Laureates but “of course very disappointed” that there haven't been more women given the honours.

He says the selection committee has made a special effort to ensure that more women scientists are nominated, as well as to consider ethnic and geographic diversity, and that he hopes the situation will be different in coming years.

“I suspect that there are many more women deserving to be considered for the prize,” he says.

The Nobel Prize in Economics winner, Richard H. Thaler, is now on the phone answering journalists' questions about his work.

So far, journalists have asked about his role in the film The Big Short, where he gave a cameo explaining behavioural economics, and his opinion on US President Donald Trump, as well as about his prize-winning work.

The most important aspect of his research, he says, is the recognition that economic agents are human — and that this must be incorporated into economic models.

Thaler's work looks at how psychology influences economics, which goes some way to explain irrational behaviour.

“He has made economics more human,” said Peter Gärdenfors from the Academy.

Thaler has used the myth of Odysseus, the Greek king, and the sirens, to show tension between long-term planning and short-term temptation. In Odysseus's case, this refers to the choice of continuing with his voyage or going immediately to the sirens, but for ordinary people, this might mean the decision putting money in a savings account or spending it immediately.

He has also launched a programme called 'Save more tomorrow' which helps people make personal financial decisions based on their long-term impact.

Members of the Royal Swedish Academy of Sciences are now explaining the aspects of Thaler's work which won him the prize.

Richard H. Thaler has been described as a “pioneer” in integrating psychology and economics, whose work has “paved the way for a new field in economics”.

The winner of the 2017 Nobel Prize in Economics is awarded to Richard H. Thaler from the University of Chicago for his “contributions to behavioural economics”.

Watch the announcement of the 2017 Sveriges Riksbank Prize in Economic Sciences in Memory of Alfred Nobel! #NobelPrize pic.twitter.com/xV5xJ7LAJg

With five minutes to go until the announcement, the Royal Swedish Academy of Sciences is packed with journalists from across the globe.

We've just been told they're running on time, so expect an announcement in five minutes! #NobelPrize pic.twitter.com/ssCGtLOIhz

The majority of past winners have come from the US, and only two Swedes have ever received the honour. The last Swede to be made a Nobel Laureate in the economics field was Bertil Ohlin back in 1977, and the only other person from the nation to manage the same is Gunnar Myrdal in 1974 – though last year's winners included a Swedish-speaking Finn.

Could that be about to change? We're about to find out.

We'll bring you the name of the winner(s) as soon as the announcement is made, but you can also watch the 2017 Nobel Prize in Economics announcement streamed live using the player below. Swedes tend to be pretty punctual, so keep your eyes peeled as we approach 11:45.

Since it was first set up in 1969, the Nobel Prize in Economics has been given out 48 times to a total of 78 laureates. You can explore the full list and find out about the winners’ work here, but here are a few stats to get you started.

The youngest Laureate was Kenneth J. Arrow in 1972, while the oldest was Leonid Hurwicz who was 90 when he won in 2007. The average age of Laureates at the time of winning is 67 years old.

As we mentioned earlier, just one woman has been awarded the prize.

Pictured below are members of the Royal Swedish Academy of Sciences getting ready to vote for this year's winners.

So how exactly are the winners chosen?

The Economics Prize Committee sends out invitations to “thousands of scientists, members of academies and university professors in numerous countries” each year to ask for nominations. Further nominations may be made by Academy members and former Nobel laureates.

Then, the committee and a group of “specially appointed experts” look into all the nominations carefully, before taking the final vote. More information on the tough selection process can be found on the Academy's website.

Members of the Academy gather before the voting for this year’s Prize in Economic Sciences, this is exciting! #NobelPrize pic.twitter.com/u5YwqZ7JzE

The venue for the Economics Prize announcement is the Royal Swedish Academy of Sciences. The Local Sweden's editor, Emma Löfgren, is there now, while our assistant editor Catherine Edwards is taking over this live blog. Get in touch on Twitter with any fun Nobel Prize facts, thoughts, or speculation.

As well as being the name of the building, the Academy is the scientific organization responsible for awarding the prize, and its motto is: To promote the sciences and strengthen their influence in society.

At @vetenskapsakad for the #NobelPrize in Economics (“It's Sveriges Riksbank Prize in… never mind”). FYI, it's autumn in Stockholm. 🙁 pic.twitter.com/5RSqtcLVIR

If you missed last year’s prize, here’s a quick recap: Helsinki-born Bengt Holmström of the Massachusetts Institute of Technology and London-born Oliver Hart of Harvard University took the honour thanks to their contributions to contract theory.

READ MORE: Who are the 2016 Nobel Economics Prize winners?

Today’s award is unique in that it is the only Nobel Prize not included in Alfred Nobel’s last will and testament. It was established by Sweden’s central bank, Sveriges Riksbank, in 1968 to honour the memory of Nobel.

Based on a donation from the bank on its 300th anniversary in 1968 to the Nobel Foundation, the prize has been awarded to 78 Laureates since 1969, so it now has a strong history in its own right.

Only one woman has been awarded the Prize in Economic Sciences so far however – Elinor Ostrom in 2009. Could that change this year?

#NobelFacts In 2009, the 1ST woman was awarded the Prize in Economic Sciences – Elinor Ostrom! pic.twitter.com/xkRwbCh1v1

Good morning and welcome to the final day of Sweden’s Nobel Prize announcement season, where money is on our minds as it's time for the Nobel Economics Prize, or the Sveriges Riksbank Prize in Economic Sciences in Memory of Alfred Nobel, as it is formally known.

It's that time of the year again! #NobelPrize #Economics pic.twitter.com/OudNRWKfeJ

The Local Sweden’s editor Emma Löfgren is off to the announcement at the Royal Swedish Academy of Sciences and will be live tweeting all the build-up on the ground ahead of the big reveal at 11.45, while this live blog is managed by Lee Roden.

If you haven't already, make sure to catch up on all the excitement from the first week of 2017's prize season, where The Local covered the Physiology or Medicine, Physics, Chemistry, Peace and Literature prizes in extensive detail, and tried to make everything just that little bit more understandable with the help of experts in each field.