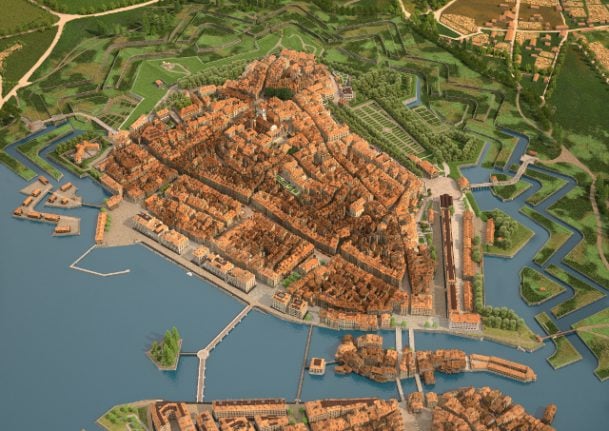 An aerial view of Geneva in 1850. Image: geneve1850.ch
The website geneve1850.ch, launched on Tuesday, is the result of six years work to digitize a model of Geneva in 1850 made under the direction of Geneva architect Auguste Magnin.
Created between 1878 and 1896, the model shows Geneva still surrounded by its fortifications. The metal, wood and glass construction contains 2,000 buildings with 40,000 windows and 1,500 trees.
It was first shown at the Swiss national exhibition in 1896 and was later put on display at the city’s Art and History Museum and, after restoration, in Maison Tavel, a museum in Geneva’s oldest private house.
In 2011, looking to preserve the model digitally, a group of historians discovered it was made with a geometric accuracy that was unprecedented for the time.
They decided to make a digital representation of Magnin’s work along the lines of Google’s street view, a project involving around 50 specialists.
The new app and website can be viewed on desktop or smartphone and allows users to explore the streets of Geneva as they would have been in 1850. Image: geneve1850.ch
“Geneva is likely to see major developments in the coming decades. It is essential to understand where we come from and that we have already experienced changes,” Geneva MP Antonio Hodgers told the media.
Currently the streets are shown empty, but GE-Story, the association behind the project, is looking for further funding to be able to add people and activity to the digital model.
The data produced for the project has been made available to all, allowing scientists and artists to use it.
As a result, the University of Geneva has already used the data to develop a tool to measure migration in the 19th century, by cross referencing the digital model with the register of residence permits.
READ ALSO: Ten reasons why Geneva is a great place to live