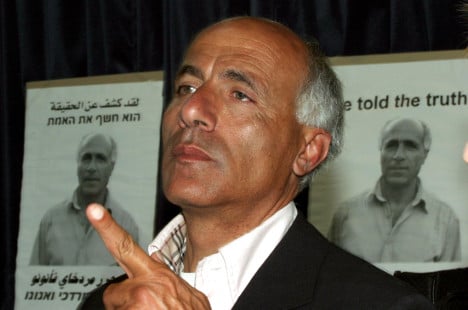 “We made a request for family reunification as that's exactly the case here, for spouses and a family to be able to live together,” Kristin Joachimsen told TV2 late on Saturday.

“So even if I know the affair is controversial in some circles, it's the family values that won over,” she said.

But she said she did not know when her 62-year-old husband could join her in Norway.

Karl Erik Sjoholt, an official with Norway's immigration agency, confirmed the request had been approved.

“The ministry sent us the request last week and we reviewed it in the usual manner. We approved the request for family reunification,” he told TV2.

Israel jailed Vanunu in 1986 for disclosing the inner workings of its Dimona nuclear plant to Britain's Sunday Times newspaper.

He spent more than 10 years of his sentence in solitary confinement.

Upon his release in 2004, Vanunu was slapped with a series of restraining orders, forbidding him from travel, contact with foreigners or speaking to the media.

He has twice been jailed for breaking those orders.

The couple's Norwegian lawyer, Arild Humlen, said the immigration agency's decision had increased the likelihood of Vanunu leaving Israel to settle in Norway.

“I hope it will resolve a blocked situation and that Israel will seize this opportunity,” he told TV2.

Vanunu converted from Judaism to Christianity shortly before being snatched by Mossad agents in Rome in 1986 and smuggled to Israel.

On Sunday, a spokesman for Israel's foreign ministry could not say if Vanunu had made a new request to travel to Norway.

But he said restrictions on the whistleblower's freedom of movement were “due to the danger that he posed” to the Jewish state.

In a statement, the foreign ministry said: “Israel will continue to review updates of the situation in order to determine appropriate restrictions in accordance with security dangers posed by Vanunu.”

Israel is the Middle East's sole if undeclared nuclear power, refusing to confirm or deny that it has such weapons.

Israel has refused to sign the nuclear Non-Proliferation Treaty or to allow international surveillance of its Dimona plant in the Negev desert in southern Israel.