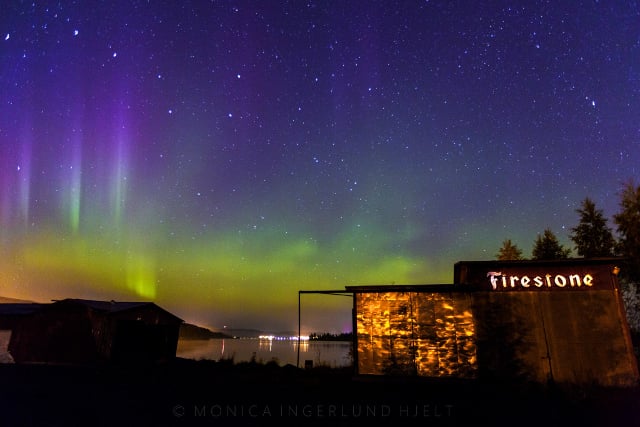 The night sky in large parts of Sweden, as far south as Visby on Gotland island, lit up in glowing technicolour shades earlier this week, thanks to the power of a strong geomagnetic storm.

It prompted both amateur and professional photographers to head outside to capture the celestial magic caused by the natural phenomenon also known as Aurora Borealis.

One of them was Monica Ingerlund Hjelt who took the above picture at Tavelsjö near Umeå on Thursday.

We asked the Northern Lights photographer for her best advice for those who want to try to snap their own pictures. Here are her tips:

1. Keep an eye on the weather report for Aurora predictions. There are many apps and websites that can be very useful (The Local recommends Facebook group Norrsken Sverige, SpaceWeather or Lights Over Lapland).

2. Find a dark place, preferably away from any city lights. Look up to the north, using a compass if needed.

3. I use a DSLR camera with a light sensitive lens and a tripod for best result, but on a good day you can photograph it with your mobile phone. Try different exposure techniques – this will take some practice. Play with different compositions but most importantly, have fun out there!

Check out more of her photography here, and some of our favourite snaps on social media below:

A bit of northern lights above Visby the other night. #norrsken #northernlights #aurora #auroraborealis #visby #gotland

The northern lights showed up late Thursday night in Sweden. Once again I got a glimpse of the green gold from my village at the west coast. The northern sky was enlightened for a few hours, visible for the eye 1,5 hours. It never stops to amaze me.