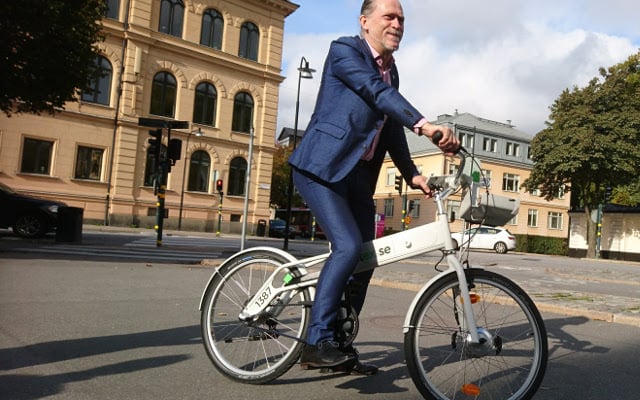 Stockholm Vice Mayor of Traffic Daniel Helldén on one of the new bikes. Photo: City of Stockholm

The Swedish capital's current system uses around 1,200 standard bikes placed at stations mostly in the city centre open for use between April and October. According to the City of Stockholm, the bikes were used more than 500,000 times in the 2016 season, but there is a demand for more locations and longer usage periods.

With the contract for the current bikes coming to an end, the scheme is about to get a major improvement, increasing the capacity to 5,000 and swapping the bikes for modern hybrid electric models. It will also be open all year round.

“The way it will work is that when you register, you are given a small battery which you can charge at home. If you don’t want to use the battery, you just use the bikes like a normal bike, but if you want an electric one, you connect the battery, which is included in the normal season ticket price,” Daniel Helldén, Vice Mayor of Traffic at the City of Stockholm, told The Local.

READ ALSO: Meet the mayor who wants to turn Stockholm into the world's smartest city

While the current bikes are only open for use between 6am and 10pm during the summer season, the new ones will be available to use 24 hours a day, throughout the year.

“It will be open all year round, all day. So if you want to commute with them from Fruängen or Farsta for example, you can use them for that. That was part of the thought with them being electric bikes too: you can cycle longer distances even if you don't cycle regularly. So it's both for people who want to cover short distances from the subway to a meeting for example, but also people who commute on bikes. You can use the bikes for three hours at a time, then if you want to have it longer for up to 12 hours you can pay a bit more,” Helldén explained.

A recent study by the Swedish School of Sport and Health Sciences concluded that a third of Stockholmers who commute to work by car could cycle the same distance in half an hour or less. It is hoped the new bikes can help reduce Stockholm's environmental footprint. The small green battery is added to the bike to activate its electric motor. Photo: City of Stockholm

The new system will be the first electric bike-share scheme in Sweden, and it is thought that it will also be the first hybrid version in the world. A year-long card to use the bikes will cost 270 kronor ($33), compared to 250 kronor for a summer season ticket to use the present scheme.

“It's not a lot of money. The company running the system could have asked for a higher price but decided not to. That means it should be accessible for most people,” Helldén noted.