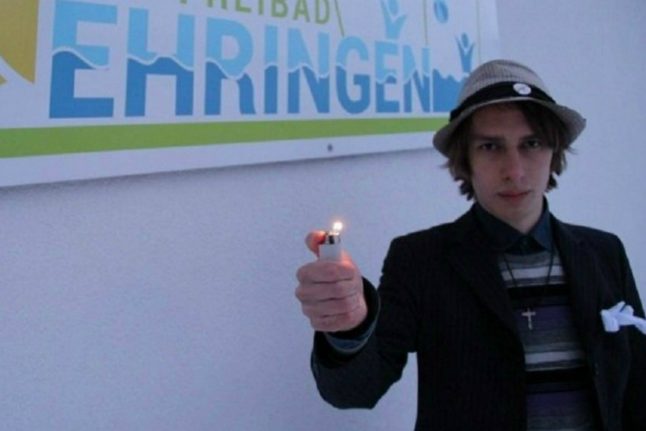 Photo: Henricus Pillardy
At the end of 2015, Pillardy decided to run for mayor of his countryside constituency of Volkmarsen, a town of 7,000 smack bang in the middle of Germany.

He was a 21-year-old philosophy student at the time and saw an opportunity to “loosen some things up which were long overdue, like the Cannabis ban.”

The only other candidate in the race was Hartmut Linnekugel, who had already been mayor for 18 years.

But aside from wanting to upset the established order, the “lavish salary” was also a great attraction, Pillardy admits.

You wouldn’t normally hear a potential mayor saying such things, but nothing about Pillardy’s campaign followed the rule book. On his ever-active Facebook page, he posted on every subject imaginable, including a particularly incendiary post about the New Year’s Eve sexual assaults in Cologne at the beginning of 2016.

The post stated that “negroes who do not control their impulses” were to blame for the attacks, and that “four million attacks by asylum seekers” are reported every day. He went on to say that women “dress provocatively” so “please don't complain if they are raped and murdered.”

If you are aware of Pillardy’s views, the post sticks out as satire which mimics sensationalist far-right statements about immigrants and women. Pillardy describes it as a caricature of the “prejudiced racist comments” which he read everywhere. He wanted to ridicule those who blame the victims themselves for rape, he explains.

But many Volkmarsen locals took the post at face value, leading to charges of incitement of hatred being filed against him.

Pillardy believes that his quotes were deliberately misconstrued by locals who were affronted by his attempt to run for mayor.

“Thinking in a utilitarian way, I haven't hurt anybody, therefore I don't see a problem with it,” is his own defence of the post.

But inciting hatred isn't the only charge against him. A second charge of deception leaves less room for philosophical interpretation. The 23 year old is also accused of misleading citizens so that he could collect the 62 required signatures of support needed to run for mayor.

Fifteen people who gave their signatures maintain that Pillardy didn't inform them of what their support was to be used for. They claim they thought it was a petition for a new swimming pool in the town.

Pillardy admitted to Vice that when he and his colleague went out canvassing for signatures, they didn’t always mention the candidacy, saying “if people don’t read the documents correctly, what can I do about it?”

The trial has been held up for several months as the judge ordered a committee to decide whether the signature forms had been falsified, but will continue through September.

If he is found guilty of both charges, Pillardy could face a jail sentence of up to five years in prison.

But he is hoping that the court case will instead shoot him to public prominence.

“As soon as I leave the court room I'm going to turn my attention to writing,” he says. “Maybe I'll even have the luck of being offered a column in a well-heeled newspaper.”