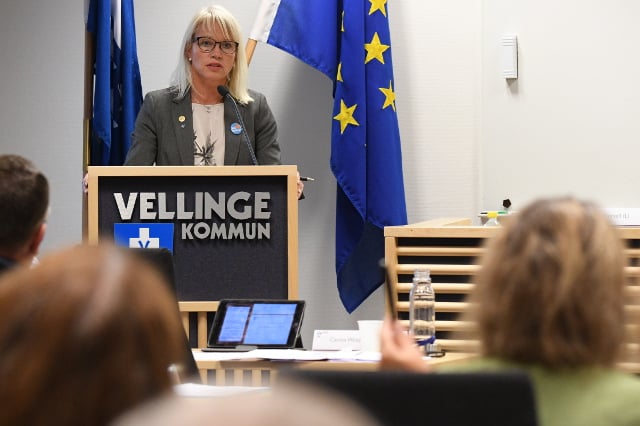 Vellinge Municipal Board leader Carina Wutzler argues a ban on begging is needed in the town. Photo: Johan Nilsson/TT

In August, the municipal board in Vellinge, southern Sweden, voted in favour of bringing in a ban on begging that would make the town the first in Sweden to do so. On Wednesday it was approved by the next body in the chain of command, the municipal council.

The proposal would mean a ban on begging at several squares and public places in the municipality from January 2018. It will first have to be approved by the Skåne county administrative board (länsstyrelse) before it can begin however.

And it may not make it that far, as Civil Rights Defenders has joined legal collective the Centre for Social Rights launched to launch an appeal to the Malmö Administrative Court arguing that the ban is in breach of Swedish law and the European Convention on Human Rights.

“The begging ban causes unwarranted and disproportionate restrictions on fundamental human rights and freedoms, and should therefore be repealed,” Civil Rights Defenders' legal head John Stauffer said in a statement.

The ban would in practice primarily impact homeless people belonging to the Roma minority, and would therefore be discriminatory and in violation of the European Convention on Human Rights, Civil Rights Defenders argues.

The Moderate leader of Vellinge's municipal board has in the past said she is willing to go to court if the ban is blocked.

“We have received comments from residents about issues in the municipality. In some parts of Sweden it's a problem, including with criminality, social insecurity and housing conditions,” Vellinge Municipal Board head Carina Wutzler told Swedish news agency TT.

She maintains that allowing begging is counterproductive when trying to fight poverty.

Begging is a much talked about issue in Sweden during recent years, following a surge in the practice. Between 3,200 and 3,800 vulnerable EU migrants are now thought to be living in the Nordic nation, with many asking for money on the streets.