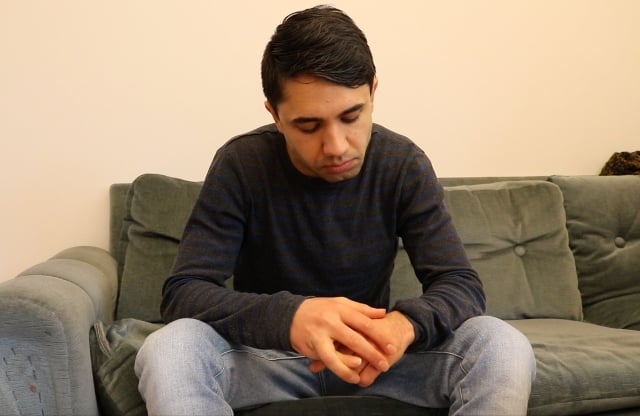 My name is Shaheen* and I was trained in Pakistan to be a Taliban soldier. I was 15 years old when I was told that I was ready to kill American and European soldiers. So, I ran away. This is my story, a story I have not told anyone else.

I was forced to join the Taliban when I was ten years old. It was after my father died. His brother – my uncle – forced me to travel from Jalalabad in Afghanistan to a religious school, a madrasah, in northern Pakistan. The madrasah was called Skhaserajoden and I spent five years there.

During these years, I tried to escape from the madrasah three times. The first two times my uncle took me back, but the third time my mother's brother helped me. I escaped Afghanistan.

I have been in Sweden for three years now, and three times I have received a negative response to my asylum application. I am under the threat of being sent back to Afghanistan. I have appealed with the precious help of a volunteering attorney, but no one knows how long it will take to get an answer. So now I'm just waiting. I have been waiting for three months since my last application.

In Gothenburg, I am completely alone. I do not know if my mother and my brother are alive in Afghanistan. I have no way of being in touch with them and it makes me sad. I cannot stop crying, especially during festivals like Ramadan. There is no one in Afghanistan that I can be in contact with. I was so young when I was forced to the madrasah. I do not know anyone. Nevertheless, the Swedish Migration Agency wants to send me back.

In Afghanistan, I am in danger: the Taliban are everywhere, even in the police forces. If I go back, the Taliban will know it immediately. The police check everyone who returns and they tell their contacts in the Taliban. So, I fear for my life, and I will be killed since I violated their rules. There is no one who can protect me there.

But the Migration Agency does not believe me. What makes it worse is that I have no evidence and nobody to confirm what I am saying is true.

When I was in the madrasah, the leaders told me I should never tell anyone about the training I received there. Even if I was caught, I should not tell what was happening within those walls. That is why I was terrified when I came to Sweden. I did not dare to tell anything to the Swedish Migration Agency: I did not know where I was and I even thought that they could be somehow connected to the Taliban.

But now I know better. Now I want to tell my story, as I understood that Sweden is a free country. In the madrasah, the Taliban taught me to fight and use weapons. We had training with guns, Kalashnikovs and rifles. I was trained especially in the use of Kalashnikovs. The leaders told us that we would kill American, Swedish and German soldiers. In addition, they wanted us to kill Afghans too.

The name of our madrasah leader was Mullah Shohaijeb. The madrasah was visited by the most important Taliban figures: I met Mullah Mansour who became the supreme leader of the entire Taliban after the death of Mullah Omar. I also saw Mullah Fazlullah, the Taliban who planned the attack against the young Nobel Prize winner Malala Yousafzai.

Besides the visitors, from time to time they also brought prisoners in the madrasah. I cannot forget how they blindfolded them and tied their hands, beat them and eventually killed them. After all, they also beat us.

The turning point was when I turned 15 years old. At that age, the madrasah students are sent to war, without any possibility of coming back. I did not want to kill anyone. So before turning 15 I ran away. One day after the common prayer I jumped in a truck that transported goods to and from the madrasah. I had planned everything: I knew we would pray together and that I could hide behind a big gate door when everyone else went back inside. From there I sneaked into the truck, hid myself under the car between its wheels and went off with it. As I tried to hold on to the car, I hurt my back. Still to this day I have pain.

I do not know how long the car drove, but as soon as we arrived at the Torkham border between Pakistan and Afghanistan, I jumped off and I hid in a container. I knew there was a way from there to my hometown near Jalalabad.

That night I left Afghanistan. My mother's brother entrusted me to a man I did not know from before. Nor do I know how my mother's brother knew him. I had no idea of where that man was taking me, but in the end, I ended up in Sweden. The trip took a little over a month.

In the beginning, I travelled with a huge group of Afghans: children and families. We were hiding in woods and mountains during the days, and travelling by lorries and containers in the evenings and nights. For several days we didn't eat, drink or breathe fresh air.

Throughout the trip, I saw no other people – just those who were in the same group with me and the men who took us from one place to another. We switched groups and group leaders every two or three days. Soon I did not know anyone and I did not understand what they were talking about. I do not know where they came from or where they were going.

When I told all of this to my lawyer, she asked me why I did not explain my story earlier. It is hard. When I feel anxious, I forget everything. I cannot remember the awful things that have happened. When I am at home, I sometimes feel so sad that I have been thinking of killing myself.

I have told the Migration Agency that if they will decide to send me back to Afghanistan, it is better for me to die here because I do not know how the Taliban will kill me in Afghanistan.

I do not want anything other than just to stay here. And to be hopeful. I have dreams, and I still dream the same dreams that I did before: that I become a dentist. And when that happens I would like to say, “Yes – it is me, Shaheen, who overcame all the obstacles”. But if it is not going to happen, I do not know what will.

*Shaheen's last name is not published to protect his family in Afghanistan.