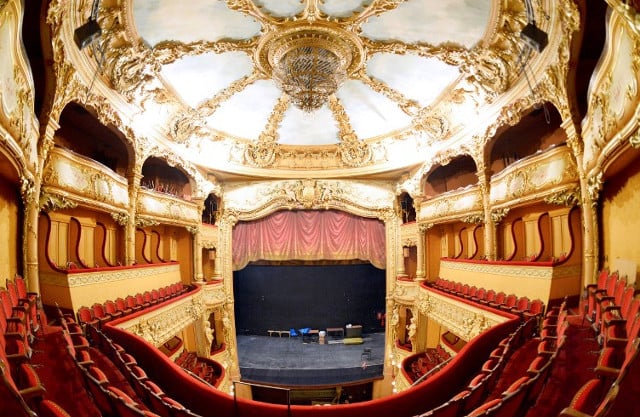 Inside the theatre de l'Athenee in Paris. AFP.
Twelve privately-owned theatres in Paris will in November begin apeing cinemas by showing ads as well as teaser videos for their forthcoming productions.
Five playhouses outside the capital have also signed up with up to 30 other theatres — including subsidised public ones — for talks to follow suit.
“Theatres are caught in a double bind: how to promote their own plays and how to make up for falling receipts and subsidies,” said  Alexandre Vernier, who heads ODW Regie, the agency behind the move.
His company will screen four minutes of ads before plays start, two minutes of normal advertising with the rest of the time given over to promoting upcoming plays.
“The idea is not to irritate theatregoers but to give them something to watch while they wait for the play to start,” Vernier told AFP.
“Theatres are prestigious places so the advertising will be high-end, for cars, jewellery and perfume,” he added.
Theatres are already trying to drum up interest in new productions with video clips posted on social media, while cinemas in the French capital regularly show ads for new plays, ballets and stand-up shows.
'Do we need more ads?'
Karine Marchi, who co-runs four theatres in central Paris, said showing adverts in theatres themselves was an obvious next step.
“The fact that we can promote our own plays is really something for us. We do not have the crazy sums you need to drum up publicity,” she said.
Marchi argued theatres had been missing a trick for decades by not copying cinemas.
“When I go to the cinema the trailers really make you want to go see those films and I hope the same will be the case for our audiences.”
But many theatre owners remains sceptical.
Jacques Mailhot, who runs the cabaret theatre Les 2 Anes (The Two Donkeys) in the French capital, said, “We are already being bombarded with advertising everywhere, do we need to add any more?”
He also claimed that the idea was not new — theatres used to project crude written adverts for their productions in the past.
And Bernard Murat, who owns the Edouard VII theatre in Paris and heads the private theatre union, said chasing after advertising money was an “expression of disarray”.
“I think we should be looking at other ways of getting the means that we should have, notably from he state because of our public service,” he added.
And he insisted that letting in advertising might lead to “ridiculous” scenes.
“I hope that we won't end up with adverts between acts or actors having to stop before they deliver a quip for an ad.”