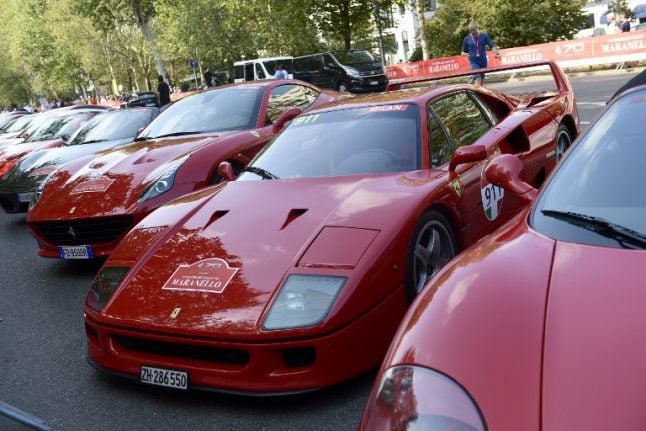 Italian Ferrari automobiles are on display at the Corso Sempione in Milan before taking to the road towards Maranello, the home of Ferrari, to celebrate the Prancing Horse's 70th anniversary, on Septe
Some 500 sleek, purring sports cars are gathering in Milan on Friday before the festivities move to Modena, where founder Enzo Ferrari was born, and end with an exclusive party in Maranello, where Ferraris have been made since
World War 2.
“Ferrari is a mythical brand: it has had a fabulous track record in speed and represents the pinnacle of the sports car,” automotive historian and enthusiast Patrice Verges told AFP.
For luxury motor fanatics and punters alike, there is something “magic” about Ferraris and their distinctive sound.
“Having a Ferrari and being watched is part of the game,” Verges says.
It all started when Enzo Ferrari, a racing driver, formed the “Scuderia Ferrari” (“Ferrari Stable”) in 1929 and prepared and fielded Alfa Romeo racing cars.
It was not until 1947 that the first Ferrari (125 S) was born — designed by Ferrari, produced at the Maranello factory and bearing the brand's symbol, a black horse on a yellow background, bordered by the colours of the Italian flag.
The stallion, rearing up on its back legs, its tail swept upwards, was chosen as a tribute to Francesco Baracca, a World War I Italian air force ace who used to paint a prancing horse on the side of his planes.
The pilot's mother suggested Ferrari use it as a good luck symbol, and he added the canary yellow background as it was the colour of his hometown of Modena. An Italian Ferrari model car arrives on September 8, 2017 at the Corso Sempione in Milano as it makes its way to Maranello, the home of Ferrari, for a meeting of 500 vehicles to celebrate Ferrari's 70th anniversary. PHOTO: MIGUEL MEDINA / AFP
'Happy few'
The Ferraris soon took the luxury world by storm. The cars were, and still are, reserved for a “happy few” willing and able to shell out at least €150,000 ($180,000) — or over one million euros for limited series editions.
Patience is a must: Ferrari boss Sergio Marchionne said last year the waiting list for a Ferrari 488 was three years.
The brand, which split from Fiat Chrysler (FCA) in 2015 and is now listed in Milan and New York, boasts enviable results: €3.1 billion turnover in 2016 for 8,014 cars delivered, and a net profit up 38 percent to €400 million.
Its success lies in its ability to combine “industrial craftmanship of the highest quality” with “an extremely close dialogue with its customers,” says Carlo Alberto Carnevale Maffe, professor of strategy at Milan's Bocconi University.
The personalisation options are extensive — from steering wheels, to seats and dashboards — and customers are welcome to visit the factory, where all requests are welcome as long as they don't alter the car's safety or engineering. A yellow Italian Ferrari  on display at the Corso Sempione in Milan. Photo: MIGUEL MEDINA / AFP
'Dream factory'
Carnevale Maffe is of the opinion that Ferraris have to be “earned”.
“You have to belong to the club. There are so many social climbers, nouveaux riche who want to be admitted but they are looked at with some suspicion,” he said.
Ferrari used to be “a brand for enthusiasts: it needed to be because its cars kept breaking down all the time, though of course no-one admitted it,” says Verges.
Today, “it's more a mark of the wealthy middle class” who buy the motors as investments, he says.
The myth may have taken a hit, but the fact remains that the most expensive car ever sold at auction is a 1957 Ferrari 335 S Scaglietti, sold at auction in 2016 in Paris for €32 million.
On the circuits too, the oldest Formula One “stable” is still king. And it's after the best birthday present of all, with driver Sebastian Vettel in with a chance of winning the world title against Lewis Hamilton and his Mercedes.
After 68 seasons, the Scuderia holds an impressive track record of 228 Grand Prix victories, 16 Most Constructors' Championships and 15 Most Drivers' Championships.
Ferrari “is not a car factory”, it's “a dream factory”, said Carnevale Maffe.

Ferrari unveiled its new SF1000 car for the 2020 Formula One season, which they hope will deliver a first world drivers title since 2007, during a glitzy ceremony on Tuesday.

The single-seater's name acknowledges the fact that the Italian team will start its 1,000th world championship race during the coming campaign, which begins with the Australian Grand Prix in Melbourne on March 15. Narrower than last season's SF90, with a deeper red colouring the body, Ferrari is pinning its hopes on the SF1000 car earning them drivers and constructors titles that have eluded them for 12 and 11 years respectively.

“I like it very much,” said German driver Sebastian Vettel.”It's much narrower at the back than last year and it is also redder, it's even better. I'm impatient to drive it, that will be even more fascinating than looking at it.” The Scuderia broke with tradition and presented its new racing car outside of its stronghold of Maranello, unveiling it instead amid of sea of red on stage at the Teatro Romolo-Valli in the nearby city of Reggio Emilia.

“This is a very important place for our country,” chairman of the Ferrari group John Elkann explained.
“It was in this city that the tricolour flag, which became that of Italy, was created. And Ferrari is proud of Italy and of representing Italy.” “It's 70 years of Formula One, we have been there from the start and we are going to reach the figure of 1,000 Grands Prix, which is something incredible.”

Barring a forced change in the calendar because of the deadly coronavirus in Asia, the milestone should be reached in June during the Canadian Grand Prix in Montreal.

“Maybe it looks a lot like the SF90, but I can assure you it is very different,” continued Binotto. “We still have to make progress, especially on reliability,” he added, recalling that Ferrari, like the other teams, had to face “the double challenge” of preparing the next season in parallel with the following one, when new rules will come into force.

Binotto stressed that this season veteran Vettel and 22-year-old Charles Leclerc, who impressed on his debut last season, would be starting on an equal footing.

“We have seen that they can both fight for the best results. They are both on the same level. It is up to them to race,” he added.

Last season, the association between the experienced Vettel and Leclerc often turned into a duel, coming to a head when the two drivers collided during the Brazilian GP.

But 22-year-old Leclerc, who won two races and finished fourth place in the world championship, said lessons had been learned.

“We have learned the lesson from Brazil. We are free to race, but we are teammates,” he said.

“A lot of people are working behind us, as a team, and things like Brazil should not happen.”

Both drivers said they were impatient to try out the new car, which will be on track next week for the pre-season testing in Barcelona.

“I felt emotional when I saw it,” said Monaco's Leclerc.

“Now I can't wait to be out on track and try it and to show all the work that has been done on this car. It's going to be a great challenge,” he added. “I'm ready to learn from my mistakes to become an even better driver.”