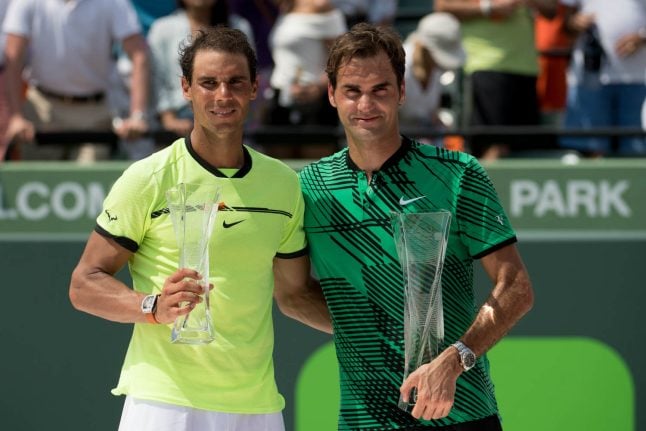 Rafael Nadal and Roger Federer after facing each other in the final of this years's Miami Open. Photo: AFP

But even if not, the two career leaders in men's Grand Slam titles will have the chance to bond as teammates and possibly even doubles partners later this month in a new Europe versus The World team event.

“Good for a change, yes, after all these years,” Federer said. “If I can help him, great. If he can help me, even better.”

Federer rolled into the fourth round of the US Open on Saturday, extending his bid for a 20th career Grand Slam title by downing Spanish 31st seed Feliciano Lopez 6-3, 6-3, 7-5.

The 36-year-old Swiss third seed, seeking a record sixth title on New York hardcourts, could meet world number one Nadal in a Friday semi-final at Arthur Ashe Stadium in the one Slam where they have never played.

“For many years Rafa and me, we've tried to play against each other here, and it just didn't work out,” Federer said. “Now this week, I don't feel necessarily the pressure's there.

“I'm happy I'm still around. Rafa fought well through again today. I'm happy for him, too. We'll see if it gets done or not. I'm curious to see myself.”

Federer is having a banner season after some suspected he might never lift another Grand Slam trophy, taking the Wimbledon and Australian Open crowns.

Nadal has done the same at age 31, winning his 15th Slam title by capturing his record 10th French Open crown.

But the long-time rivals will team up on September 22nd-24th for the Laver Cup in Prague, a new three-day team event pitting Björn Borg's European squad against a World lineup guided by John McEnroe.

“Rafa, he has been such a wonderful champion and a good friend of mine on the tour, one of my big rivals for life, that it's just nice to be able to spend some time with him and support him,” Federer said.

Federer, who would be the oldest US Open champion in the Open Era (since 1967), was also excited about the chance to spend time with 61-year-old Swedish legend Borg, an 11-time Grand Slam champion who captains the European side.

“For me to spend time with Björn, it's quite rare,” Federer said. “He doesn't spend so much time on the tour. When he shows up, it's short. I feel every minute you get with him is a privilege.

“Here we are, he's going to be stuck with us. So it's going, I think, to be very special for all of us, particularly me. I mean, I have incredible respect for him.”

Federer said if he could turn back the clock and face one all-time icon from another era, it would be Borg in his prime, when he was winning six French Open and five Wimbledon crowns from 1974 to 1981.

“If I could play one player ever going back, I feel like it would be Björn,” Federer said. “I feel he's that incredibly good, for what he did for the game. If I look how he played, what he brought to it, it's crazy.”