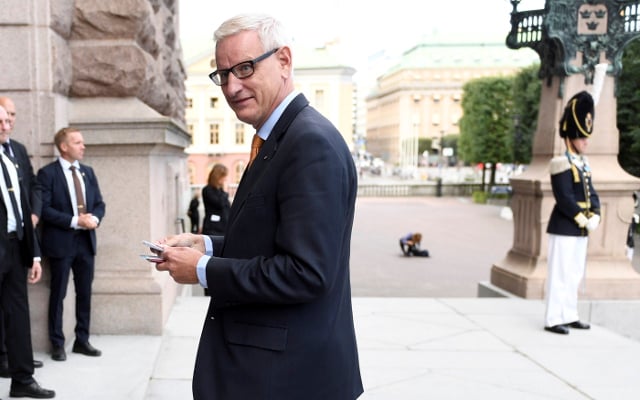 Inizio polled Swedes on the issue for newspaper Aftonbladet at the weekend, interviewing 1,400 people, and former Prime Minister and Foreign Minister Carl Bildt got the biggest backing from Moderate voters with 35 percent.

When all opinions regardless of political affiliation were taken into account he was still the top choice, backed by 25 percent.

Bildt has twice been a key figure in Moderate administrations that ended extended periods of Social Democrat rule: first as Sweden's Prime Minister between 1991 and 1994, then as Foreign Minister under Fredrik Reinfeldt between 2006 and 2014.

He has been out of politics since 2014, but has continued to make international headlines in the time since, some of them thanks to his outspoken criticism of US President Donald Trump.

When Trump made his “last night in Sweden” comments about a fictitious violent incident in the country last February for example, Bildt asked “what has he been smoking?” in response, before going on to add:

Just a piece of friendly advice: when you are in a hole, stop digging.

READ ALSO: Bildt and other Swedish figures respond to Trump

The former PM has not expressed any desire to take charge of the Moderates again (he opted not to comment on the poll when asked by Aftonbladet), and bookmakers currently have him placed as a clear outsider, so at the moment, there are no signs of popularity in the polls translating to political reality. One explanation for the 68-year-old polling well could simply be that he is the best-known of the options available in the multiple coice Aftonbladet/Inizio poll.

The next most popular candidate for Moderate voters according to the poll is former Social Security Minister Ulf Kristersson with 16 percent. Kristersson has not ruled out running to be the new leader, and the Norrbotten branch of the party has already said it wants to see him elected.

The second most popular choice among all voters meanwhile is also a former minister, Mikael Odenberg with 11 percent. Ex-Defence Minister Odenberg said on Monday he would make himself available as a candidate if the party's nominating committee proposed it.

Kinberg Batra announced her resignation as Moderate leader on August 25th after they continued to perform badly in the polls and voices within the party expressed their discontent. The Moderate nominating committee will hold an extraordinary meeting to elect her replacement in October, and the new leader will have less than a year to try and revive the party's hopes of challenging for government in the September 2018 Swedish general election.