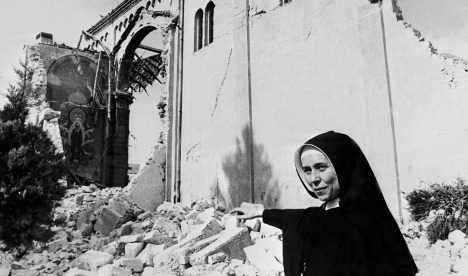 Photo taken on May 17th 1976 of a nun showing a church destroyed by the Friuli-Venezia earthquake. Photo: AFP

Monday night's magnitude 4.0 earthquake near the island of Ischia, in the Gulf of Naples, caused a church, residential buildings and several modern structures to collapse.

However, historical evidence however suggests the impact could have been far worse.

On the night of July 28th, 1883, an earthquake “destroyed Casamicciola,” according to an emergency call made by the chief of police at the time to his superiors in Naples.

More than 2,000 people died in the 1883 earthquake, say historical sources, mostly in the towns affected by the current earthquake: Casamicciola, Lacco Ameno and Forio.

The Neapolitan philosopher Benedetto Croce's family were killed in the 1883 earthquake, according to the Corriere della Sera.

Italy has two fault lines, making it one of the most tectonically active countries in Europe. The country has a long history of earthquakes, with one in Sicily recorded in 1169, killing at least 15,000 people.

Here are some of the most destructive in the last 150 years.

Most of the town of Gemona was completely destroyed, as were the nearby towns of Buia, Colloredo, Osoppo, Venzone, Forgaria and Maiano.

Some 157,000 people were left homeless while over 70,000 buildings were declared unusable. Photo taken on May 7th 1976 in the village of Buia of a church destroyed after the Friuli earthquake. Photo: AFP

An earthquake measuring 7.9 on the Richter scale struck the southern Calabria region, from the city of Cosenza in the north to Reggio Calabria in the south, killing at least 2,500 people and destroying 25 villages.

Just a few years later, a double catastrophe reduced Reggio Calabria and Messina, Sicily’s second-biggest city, to rubble. The 7.2 magnitude earthquake was followed by a tsunami, which between them claimed 80,000 lives. Many of the survivors either migrated to other Italian cities or the United States.

A 7.0 magnitude earthquake hit the town of Avezzano, in the central Abruzzo region, killing at least 33,000 people.

Some 1,400 people were killed and up to 7,000 injured when a quake measuring 6.5 on the Richter scale hit Irpinia, a region of the southern Appenine Mountains.

Fifty years later, 2,700 people died and more than 7,500 were injured when a 6.5 magnitude quake struck the southern Campania and Basilicata regions. In the town of Sant’Angelo dei Lombardi, 27 children died in an orphanage, while in Balvano, 100 people were killed when a medieval church was destroyed during Sunday mass.

The next deadliest earthquake occurred in the Abruzzo region in 2009, with L’Aquila, a 13th century city, being the worst affected. The 6.3 magnitude quake left 308 people dead, more than 1,500 injured and over 65,000 homeless.

Although not as deadly, there were several equally as powerful earthquakes in the intervening years, including: A policeman and a fireman carrying a precious stone from the Church of Saint Francis of Assisi after the 1997 earthquake. Photo: Gerard Julien/AFP

Two quakes, within just a few days of each other, and measuring 6.4 on the Richter scale, claimed 13 lives in the Umbria region. More than 40,000 people lost their homes. The quake also seriously damaged the St Francis Basilica in Assisi. A fireman drinks water as his team works to free trapped children in the rubble of a school whose roof collapsed. Photo: Alberto Pizzoli/AFP

Thirty people, mostly children, were killed when a school collapsed amid a 5.9 magnitude in Campobasso, in the south-central Molise region. A house destroyed by the earthquake in Emilia-Romagna. Photo: Olivier Morin/2012

A 6.0 or 6.2 magnitude quake hits mountain villages in a remote area straddling the regions of Umbria, Marche and Lazio. At least 247 people are killed and dozens more are injured, trapped or missing.