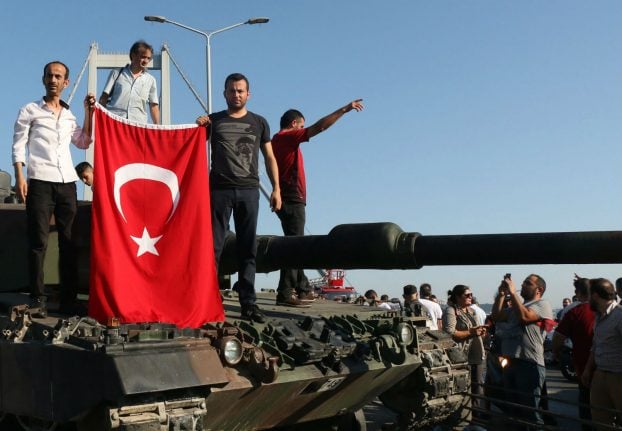 Turkish citizens stand on top of a tank after the failed coup in 2016. Photo: DPA

Ankara blames the doomed bid on July 15, 2016, to oust President Recep Tayyip Erdogan on the US-based Islamic preacher Fethullah Gulen, and has implemented a ruthless crackdown on his suspected supporters.

The authorities have arrested over 50,000 people, a round-up whose size has alarmed the West.

Turkey has pressed Washington – so far without success – to extradite Gulen from his Pennsylvania compound to face trial in Turkey.

But the second most wanted suspect is Adil Oksuz, a theology lecturer whom Turkish officials accuse of being the so-called “imam” of the plot by coordinating actions on the ground in Turkey with Gulen.

Oksuz was detained in Turkey after the coup was quashed, but was subsequently released and is now on the run.

Foreign Minister Mevlut Cavusoglu said reports had emerged that Oksuz was in Germany and urged Berlin to arrest and extradite him if this was the case.

“As the foreign ministry, we sent an official note to Germany on this,” Cavusoglu told the TRT Haber news channel.

“If this person is there, we would like him to be arrested without delay and extradited to Turkey,” he said.

The Turkish press has suggested in recent days that Oksuz had been sighted in German cities including Frankfurt and Ulm.

The note asks that the German authorities investigate the reported sightings of the coup suspect, the state-run Anadolu news agency said.

If the presence of Oksuz in Germany is confirmed, it would add yet another bone of contention in increasingly troubled relations between Ankara and Berlin.

Ties between the two countries – key NATO allies with strong historic ties – have nosedived over Ankara's arrest of German citizens and Berlin's strong criticism of the Turkish crackdown.