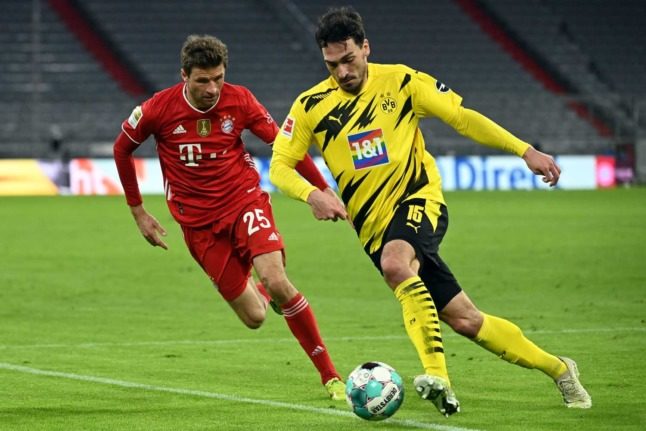 With the kick-off of the German Football Cup last weekend and the start of the new Bundesliga season this Friday, the pressure’s on to find a team to support.

No sweat – our guide will help you find out which one best corresponds to your character.

If you’re a brash millennial who doesn’t play by the rules, lives off of your parents’ money to survive and tells people to call you by a nickname you gave yourself rather than your real name, the RB Leipzig is the team for you.

Very new to the football scene, RB Leipzig was only founded in 2009. This is considered young as many German football teams have been around since the 19th century.

RB Leipzig started off playing in the fifth division, but they quickly raised in the ranks to the 3. Liga (third division) in 2013 and then to the 2. Liga (second division) the following season.

They were finally promoted to the first division in May 2016. In that time they’ve finished second twice and made it to the semi finals of the Champions League.

These guys are so hated that fans of one opposing club threw a decapitated bull’s head from the stand at a game in their first year.

So if you, too, have sensed feelings of annoyance and jealousy from people at how young you are and how fast you’ve garnered success, you might feel right at home cheering on RB Leipzig.

If you’re the type of person who is down-to-earth, hardworking, loyal and fully committed to everything you do, you might identify with a football club that isn’t rich and doesn’t get a lot of money from sponsors yet is still relatively successful: Borussia Dortmund.

The same goes if you’re someone who once had a really handsome, beautiful and charming partner who left you years ago but you still keep a few too many pictures of the two of you around the house (and in your wallet).

If either of these two categories appeal to you, then Borussia Dortmund – a first division club with 145,000 members and the highest average attendance at home games of any football club in the world – is your best bet.

Borussia Dortmund hit their modern peak at the start of the previous decade, when the aforementioned Jürgen Klopp took the Black and Yellows to two titles and a Champions League final.

Klopp has since departed for the bright lights of Merseyside where he won both the Premier League and Champions League, while Dortmund has been hitting the dating apps while bouncing from coach to coach for half a decade still trying to get the right fit.

While your opponents might have a legitimate criticism about your lack of ambition, you’re just happy to be the only other team besides Bayern who keep getting invitations to the Champions League party.

What matters to you is that that they’ve been around for over 100 years, they’re respected and well-liked and most importantly, they have people like you who they’re proud to call true fans.

Are you a trust fund kid who posts on social media about the virtues of a meritocracy? Do you think Jeff Bezos works really hard? Do you think all Germans wear lederhosen?

Then FC Bayern München is the team for you.

Everyone knows they’re the most “successful” football club in Germany. Besides, not only have they won the most amount of Bundesliga championships – 30 titles, which is well ahead of equal second-placed Dortmund and Gladbach with five – they’ve claimed the title consecutively over the past nine years.

Their budgets are huge so they can afford to pay for well-known football stars. And even their slogan Mia san mia which is Bavarian for “We are who we are” has a slight air of arrogance to it. But hey, we won’t blow your cover if you’re also into the whole old money, aristocratic thing.

Since FC Bayern München will win the Bundesliga tournament again this upcoming season and you’d just rather play it safe, we promise we won’t tell if you decide to become a bandwagoner, err, fan. Are you someone who procrastinates on all of your assignments at university, gets by on mediocre marks and somehow manages to pass all your exams?

Or are you someone who completes the tasks required of you at work with minimum effort and yet for some reason you haven’t been sacked?

If you can identify as either of these types of people, you might want to consider cheering on HSV, i.e. Hamburg.

A former Champions League winner from one of Germany’s wealthiest regions with a passionate fanbase and a great stadium culture, Hamburg are Germany’s underachievers.

After years of staying in the top division by the skin of their teeth on the final day of the season, Hamburg – the only team to have never played in the second division – were finally relegated in 2018.

Hamburg even had a clock in their stadium which counted the time they’d been in the top division.

Since then, their underwhelming underperformance has continued. Starting the 2021-22 season, they remain in the second division, while much smaller teams like Bochum, Bielefeld and Fürth have since been promoted.

Say you consider yourself alternative, independent or someone who likes to go against the grain. If this is the case, you sure as heck shouldn’t root for any of the teams listed above.

How about a team like FC Union Berlin that ditches the glitz and the glamour but seems to get the job done anyway?

FC Union Berlin’s fan base is considered small in comparison to other football clubs in Germany, but is one of the most passionate. Photo: DPA.

No worries if one of the reasons you want to support them is so you can brag about being an original fan before the team went mainstream.

And since FC Union Berlin is based in the city with arguably the largest population of hipsters in Germany, you may already live in the capital city and likely won’t have to travel very far for home games.

In reality, FC Union’s hipster reputation is only comparatively recent – and definitely only exists inside the Berlin S-Bahn ring.

For anyone living in and around Köpenick, Union Berlin has been a way of life for some time.

Despite relatively modest income, the club arguably now rivals Hertha Berlin – the club from the city’s west – in terms of support.

The following map put together by the Berliner Morgenpost shows where the support for the clubs exist in Germany’s largest city.

The diversity and the size of the club’s current fan base may appeal to you: with just over 16,600 club members, it’s not as daunting as joining a club like Borussia Dortmund that’s nearly ten times as big.

READ ALSO: How to sound like a football expert with your German pals

According to popular searches, Germany is the go-to place for good coffee and bread (although only if you like the hard kind) and the place to avoid if what you’re looking for is good food, good internet connection and low taxes. Of course, this is subjective; some people will travel long stretches to get a fresh, hot pretzel or a juicy Bratwurst, while others will take a hard pass.

When it comes to the question on the bad Internet – there is some truth to this. Germany is known for being behind other rich nations when it comes to connectivity. And from personal experience, the internet connection can seem a little medieval. The incoming German coalition government has, however, vowed to improve internet connectivity as part of their plans to modernise the country.

There are also frequent questions on learning the German language, and people pointing out that it is hard and complicated. This is probably due to the long compound words and its extensive grammar rules, however, as both English and German are Germanic languages with similar words in common, it’s not impossible to learn as an English-speaker.

Here’s a look at some of those questions…

Why is German called Deutsch? Whereas ‘German’ comes from the Latin, ‘Deutsch’ instead derives itself from the Indo-European root “þeudō”, meaning “people”. This slowly became “Deutsch” as we know it today. It can be a bit confusing to English-speakers, who are right to think it sounds a little more like “Dutch”, however the two languages do have the same roots which may explain it.

And why is Germany so boring? Again, probably a generalisation, especially given that Germany has a landmass of over 350,000 km² with areas ranging from high rise, industrial cities to traditional old town villages and even mountain ranges, so you’re sure to find a place that doesn’t bore you to tears.

Perhaps it is a question that comes from the stereotype that Germans are obsessed with being strict about rules, organised and analytical. Or that they have no sense of humour – all of these things being not the most exciting traits.

Either way, from my experience I can confirm that, even though there is truth to German society enjoying order and rules, the vast majority of people are not boring, and I’m sure if you come to Germany you’ll meet many interesting, funny and exciting people.

When it comes to the German weather, most people assume a cold and cloudy climate, however this isn’t entirely true. While the autumn and winter, especially in the north, come with grey skies and sub-zero temperatures, Germany can have some beautiful summers, with temperatures frequently rising above 30C in some places.

Unsurprisingly, the power and wealth of the German nation is mentioned – Germany is the largest economy in Europe after all, with a GDP of 3.8 trillion dollars. This could be due to strong industry sectors in the country, including vehicle constructions (I was a little surprised to find no questions posed on German cars), chemical and electrical industry and engineering. There are also many strong economic cities in Germany, most notably Munich, Frankfurt am Main and Hamburg.

Why are Germans so tall? They are indeed taller than many other nations, with the average German measuring a good 172.87cm (or 5 feet 8.06 inches), however this may be a question better posed to the Dutch, who make up the tallest people in the world.

Why are Germans so smart? While this is again a generalisation – as individuals have different levels of intelligence in all countries – this question may stem from Germany’s free higher education system or their seemingly efficient work ethic. Plus there does seem to be some scientific research behind this question, with a study done in 2006 finding that Germans had the highest IQ in Europe.

So, while many of the questions posed about Germany and Germans on Google stem from stereotypes, we can confirm that some aren’t entirely made up. If you’re looking to debunk some frequently asked questions about France and the French, check out this article by our sister site HERE.