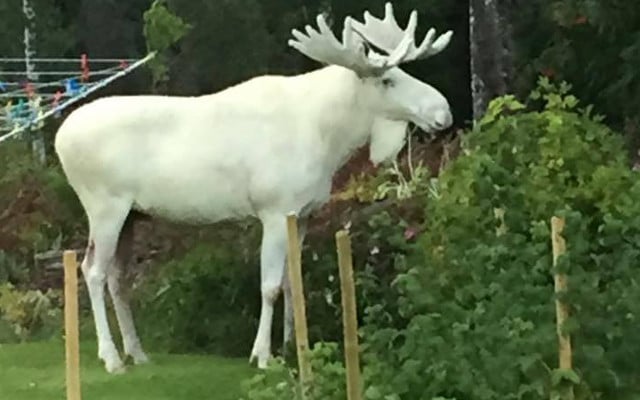 The white elk has a favourite eating spot, and the result is uninvited visitors to a Swedish couple's garden. Photo: Catrin Leverström

Featured by National Geographic, the BBC and Huffington Post, the rare white elk captured on film in western Sweden may have become a global icon, but not everyone is happy about the attention being given to the unusual animal.

Hans Nilsson's video of the white elk in Eda has notched up thousands of views both at home and abroad, and on top of already being well known in the local area, the creature is now a global celebrity as a result.

That's not good news for Catrin Leverström, who has to put up with the inconvenience of people regularly trespassing on her property in an effort to see the animal, which has developed a taste for the apples from the tree in her garden.

“The elk is sometimes here for several days in a row. For several hours he walks around and munches the apple tree and bushes. How often people come depends on when the elk is here. Sometimes it's calm for long periods, other times it's daily,” Leverström told The Local. Part of the problem stems from a local Facebook group where residents post images and locations of sightings of the animal and other white elk in the area, bringing them to Leverström's property.

“Someone asked me to speak to them in English. I don't know where they were from. Of course it's worrying now so much attention has been given to it. My husband and I joked that we should maybe sell the house now that there's so much press about the elk being here,” she explained.

“It's not particularly good for the elk to never be left in peace, constantly chased and disturbed. Unfortunately he can get aggressive,” she added.

Local councillor Nilsson had to wait years to get his glimpse of the elk, but the wave of global attention given to the resulting video means it was probably worth it.

“Everything fell into place, the location, the light and the calmness. It was an experience to meet such a stately animal up close,” he recalled to The Local.

Elk are known for their love of apples, and in Sweden there is even a popular conception that the animals get drunk off fermented fruit in the late summer and early autumn. An article from 2011 about an apparently drunken elk that managed to get itself stuck in an apple tree is one of The Local's most read articles ever.

The idea of the beasts going on boozy benders may not be founded in fact however, as a group of Swedish scientists suggested in 2014 that it is nothing more than a myth: the animals are probably too large to be affected by the small number of fermented apples they eat.