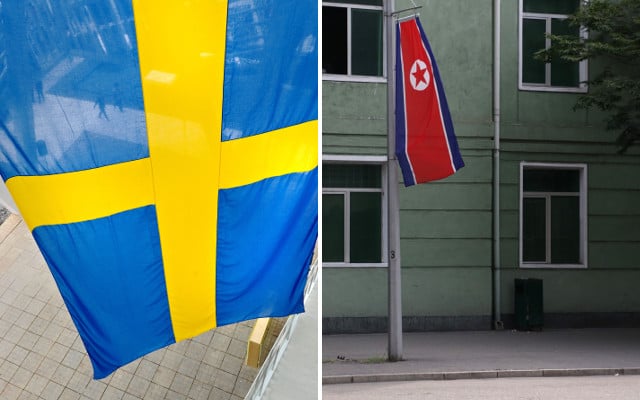 Stockholm and Pyongyang have had a relationship since the 1970s, and with Sweden being the first Western country to open an embassy in North Korea, it is fair to say their their relationship is an unusually long-standing one. In fact, until 2001 Sweden was the only Western country with an unbroken diplomatic presence in the country.

So why exactly are Sweden and North Korea so friendly, relatively speaking, compared to other western nations? One explanation is money, or rather, the potential to make it. In the 1970s the Swedish government thought there was potential to trade with newly emerging North Korea, and even encouraged companies like Sanvik, SKF and car maker Volvo to court the nation as a potential new export market.

Pyongyang didn’t prove to be the economic powerhouse Sweden had betted on however, best exemplified by a North Korean order for 1,000 Volvo 144 cars that have yet to be paid for several decades later. Sweden’s National Export Credits Guarantee Board (EKN) still sends invoices for the debt to this day, which by now has amounted to hundreds of millions of dollars.

Another factor is Sweden's famous policy of neutrality: the Nordic nation has a history (and a sometimes controversial history) of avoiding picking sides in conflicts. In the case of North Korea, that has helped Sweden to be a leader in attempting to thaw relations between the communist state and western nations. In 2001, then Swedish PM Göran Persson led an EU delegation as EU President to Pyongyang for talks with Kim Jung-Il, making him the first Western leader to visit the state. Sweden's relationship with North Korea in the present

Sweden's relationship with North Korea is not limited to the past. Since the 1990s it has given humanitarian aid to the country, and with around 40 million kronor donated annually, is one of the biggest givers of aid to the country in the world.

The Swedes also serve an important role for the US in North Korea, working as a Protecting Power for America in the country, which includes providing consular responsibility for US citizens there. It performs the same role for Canada and Australia.

There are even Swedish soldiers at the Korean border as part of the Neutral Nations Supervisory Commission, which is tasked with helping to maintain the military armistice in the Korean war and attempting to build relations between both sides of the conflict. So what can Sweden do?

Sweden can't decide how the US or North Korea will act towards one another, but it does have a unique position that it can use to try to influence both sides to avoid conflict. While the US has no formal diplomatic relations with North Korea, Sweden not only has relations, but long-standing relations with both.

Swedish Foreign Minister Margot Wallström emphasized that in a statement in August:

“Our Embassy in North Korea has a long-standing presence and a unique platform in the country (…) Our presence in North Korea enables us to engage in dialogue and interactions. We take this role very seriously.”

“I think there is a real potential for Sweden to act as a facilitator in the discussion. Sweden and the US have a good working relationship regarding North Korea, and North Korea views Sweden as a lesser evil among the international actors,” Niklas Swanström, director of the Stockholm-based research and policy institute the Institute for Security and Development Policy which has hosted North Korean research fellows told The Local.

“This changed somewhat after Sweden, as a member of the UN Security Council stood behind the new sanctions (against North Korea), but that said, Sweden has worked effectively when assisting the US and other states in returning people arrested in North Korea.”

That last point is important, as Sweden can point to recent hard evidence of its ability to ease tensions and influence in the area: the Nordic country played an active part in the release of Canadian citizen Pastor Lim from a prison in North Korea in August, who had been serving a life sentence in a labour camp. Canadian PM Justin Trudeau made a point of thanking Sweden for its help:

“In particular, I want to thank Sweden, our protecting power in North Korea, for assisting us,” he said in a statement on Lim's release.

The tiny Scandinavian country of 10 million may just have the potential to help in de-escalating the situation between the US and North Korea therefore.