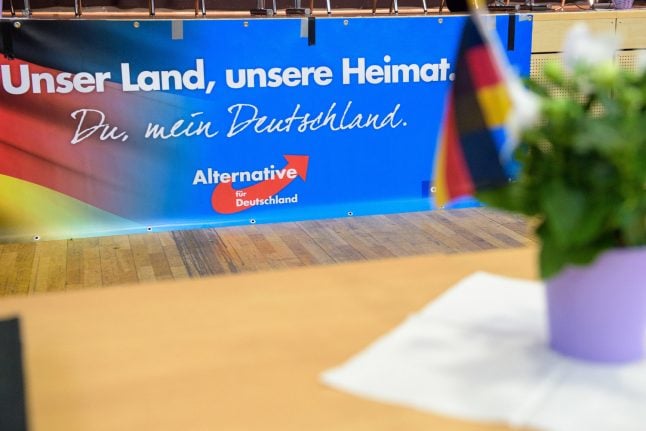 A poster reading: "Our country, our homeland. You, my Germany." Photo: DPA.

A prosecutor’s office spokeswoman said on Wednesday that AfD politician Laleh Hadjimohamadvali – a candidate in the upcoming national elections – is suspected of defamation of religious groups, as well as incitement to hatred.

Hadjimohamadvali was born in Iran and has said that she fled to Germany to get away from Islam in the 1980s after the 1979 Iranian Revolution led to the establishment of an Islamic Republic.

According to the Saarbrücker Zeitung, Hadjimohamadvali said during a party gathering on June 24th that Islam was “worse than the plague” because she said Muslims become stronger in Germany every day and are taking over an ever greater portion of the country.

A former member of the AfD reported the statements to authorities after the Saarbrücker Zeitung reported what she said.

The newspaper further writes that Hadjimohamadvali claims she has been blocked from Facebook multiple times in the past because of her posts.

Saarbrücken prosecutors are also deciding whether to investigate another AfD politician who wrote on Facebook regarding people-smuggling boats: “At best, all contents on board sink. Yes, I mean that seriously.” She further wrote that the “customers”, meaning refugees, who go to people smugglers act “like primates”.

The leading state candidate for the AfD in the national election, Christian Wirth, has distanced himself from both women, saying that the generalization and denigration of an entire religion is “not permissible”.

“There are also many peaceful Muslims in our country,” Wirth told the Saarbrücker Zeitung.

The AfD's strong criticism of the German government's refugee policies granting protection to people from mainly Muslim-majority countries in part helped the party grow in success in state parliament elections in recent years amid discontent with the handling of the refugee crisis.
But going into the national elections on September 24th, the party's current polling figures shows their support has been roughly cut in half since reaching a high of around 14 percent in many polls last autumn. Current surveys now show them at between 7-9 percent – still enough to make it past the 5 percent threshold to gain seats in the Bundestag (German parliament) after they failed to meet the mark in their first election in 2013.
SEE ALSO: 'Germany for the Germans' – explosive WhatsApp leaks pile pressure on AfD
Url copied to clipboard!