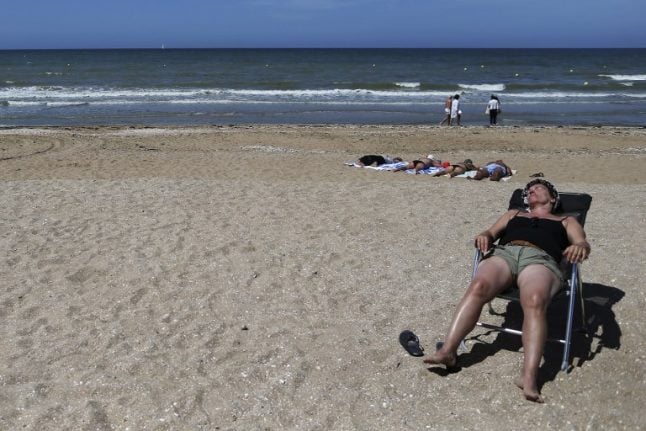 A beach in Cabourg, northern France. Photo: Charly Triballeau/AFP
While the study didn’t make pretty reading for France in general, France ranked an impressive fourth out of 45 when it came to quality of life, streets ahead of the US in 26th and the UK in 30th.
In fact, a full 63 percent of expats responded that their quality of life had improved since moving.
So what exactly is it about France that makes these expats radiate? We asked followers on The Local’s Facebook page to tell us exactly how their life quality had improved.
Here’s a taste of their responses:
Better work-life balance
Several said that life in France was “less stressful”, linking this to the importance that French people put on their out-of-work time.
“People work to live and not live to work,” says Australian Leonie Roustan.
Facebook commenter Christos Tiger from the UK noted that he now enjoyed a commute of only 12 minutes to work.
And while at work, it’s no surprise that expats find the pace relaxing, with a 35-hour work week and a generous five weeks of vacation on offer at most jobs.
The food (and wine)
Another hot topic was the food – especially the fresh produce.
F Joseph Leonard-Peray said the quality of the veggies and fruits was “incredible”, noting that most was labeled as to where they were grown in France.
Others raved about their market offerings free of pesticides and meat without hormones.
Of course, the classic French dishes were a big draw too.
“The taste of the wonderfully fresh items in the boulangerie from the croissants to the baguettes is unrivaled in the world. The demand for fresh and tasty food makes France a destination for gourmet lovers,” Leonard-Peray added.
While we’re on the subject of the dinner table, people were quick to praise the selection (and the cheap price) of a good bottle of wine.
The friendly people
Where on earth did this “unfriendly French” reputation come from anyway? Many readers of The Local said that the friendly locals played a key part in their own good quality of life.
UK native Bob McNair, now in Brittany, said: “I am made to feel welcome by total strangers despite being an immigrant and despite my currently very small command of French.”
Sandie Clark added: “I have never felt unwelcome, our neighbours and the local people in general have been so friendly, especially when they see you trying hard to speak their language.”
While those in bigger cities like Paris may argue that it’s a lot harder to make friends with neighbours (let alone meet them), those in the countryside were quick to disagree, it seems.
Property is cheaper
One other key point, presumably for people living outside of Paris, was the relatively cheap price of buying property (and living there).
One reader noted that he had bought “a small home with a modest plot of land in the countryside, for a price that in most UK cities would not buy a lock-up garage”.
Affordable and good health care
Many readers pointed out the good level of health care in France and the impact it can have on lives.
Jim Lovell said: “We are Americans. After moving here in the Var, my husband’s cholesterol levels improved so much, he has been taken off almost all of his medications. And health care is WAAAY more affordable ! We love it here ! I doubt we will ever go back.”
The space
France just doesn’t feel as packed and as busy as some countries according to some readers. The “spacious countryside” as one put it, is no doubt a plus factor.
Lack of materialism
Is France less matierialistic and commercial than the United States and the UK? Many readers thought so and the country was all the better for it.
Miscellaneous
Other points that cropped up included the pleasure of shops being closed on Sundays (a divisive issue, of course), and the generous holiday allowance (generally five weeks a year).
Others pointed to the warm weather, the rich landscapes, the petanque pitches, the history, and that the French people can apparently enjoy the sun without getting sunburnt (according to an Aussie, anyway).
The negatives
Of course, you can’t please everyone (and after all, 37 percent of expats responded that their lives hadn’t improved).
We’ll give the last word to Megan Russler, for balance.
“Bahaha! Seriously? It’s more stressful! People are rude and pushy, no-one does their job right the first time so you have to run after them, the administration is completely messed up and there is no logic at all. Everything is a battle. The wages/salaries are HORRIBLE!”
She added that she is “finally” leaving after 11 years.
But for most others France seems to offer La Belle Vie they had hoped for when making the move. 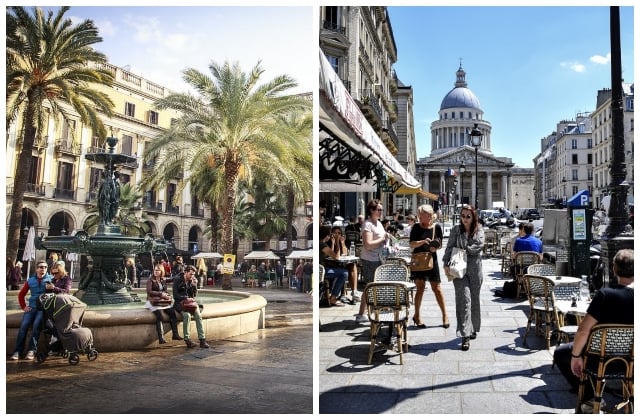 MOVING TO FRANCE
France v Spain: which is the better place to move to?

We decided to look at where in France you could afford a property on a budget of €100,000, and it turns out there are some bargains to be had.

There are a lot of caveats while searching for property, and many local variables in place, but our search does show some of the areas to concentrate on if you have a limited budget.

We used the Notaires de France immobilier website in August 2022, and we specified that the property should have at least five rooms (including kitchen and bathroom) and a floor space of at least 100 square metres.

We also discounted any property that was for sale under the viager system – a complicated purchase method which allows the resident to release equity on their property gradually, as the buyer puts down a lump sum in advance and then pays what is effectively a rent for the rest of the seller’s lifetime, while allowing them to remain in the property.

READ ALSO Viager: The French property system that can lead to a bargain

For a five-room, 100 square metre property at under €100,000, you won’t find anywhere in the Île-de-France region, where the proximity of Paris pushes up property prices. The city itself is famously expensive, but much of the greater Paris region is within commuting distance, which means pricier property.

Equally the island of Corsica – where prices are pushed up by its popularity as a tourist destination – showed no properties for sale while the region of Provence-Alpes-Côte d’Azur – which includes the French Riviera – showed only 1 property under €100,000.

The very presence of Bordeaux, meanwhile, takes the entire département of Gironde out of this equation – but that doesn’t mean that the southwest is completely out of the running. A total of 25 properties came up in the Nouvelle Aquitaine region. One property was on the market for a mere €20,000 – but it was, as the Notaires’ brochure noted, in need of “complete renovation”.

By far the most properties on the day of our search – 67 – were to be found in the Grand Est region of eastern France. The eastern part of France overall comes out best for property bargains, with the north-east region of Hauts-de-France showing 38 properties and and Bourgogne-Franche-Comté displaying 25.

Further south, however, the presence of the Alps – another popular tourist destination – pushed up prices in the Auvergne-Rhône-Alpes region which showed just three results.

In order to make a comparison, we focused our search on properties advertised online, but if you have a specific area in mind it's well worth making friends with a few local real estate agents and perhaps also the mayor, since it's common for properties not to be advertised online.

Most of the truly 'bargain' properties are described as being "in need of renovation" - which is real estate speak for a complete wreck.

If you don't mind doing a bit of work you can often pick up property for low prices, but you need to do a clear-eyed assessment of exactly how much work you are willing and able to do, and what the cost is likely to be - there's no point getting a "cheap" house and then spending three times the purchase price on renovations.

That said, there were plenty of properties at or near the €100,000 mark that were perfectly liveable or needed only relatively minor renovations.

You also need to pay attention to the location, as the sub-€100,000 properties are often in remote areas or very small villages with limited access to amenities. While this lifestyle suits many people, bear in mind that owning a car is a requirement and you may end up paying extra for certain services.

Finally remember that government help, in the form of loans and grants, is available for environmentally friendly improvements, such as insulation or glazing.