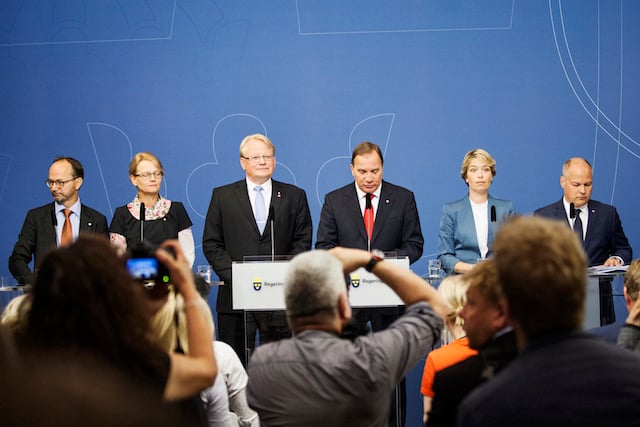 PM Stefan Löfven presenting the changes to his cabinet flanked by ministers. Photo: Emma-Sofia Olsson/SvD/TT
Tensions were high on Wednesday morning as reporters gathered at government headquarters Rosenbad for Prime Minister Stefan Löfven's press conference in response to the opposition Alliance parties' no-confidence motion against three of his ministers.
Infrastructure Minister Anna Johansson, Interior Minister Anders Ygeman and Defence Minister Peter Hultqvist were said by the Alliance to have “neglected their responsibilities” when a transport data leak made top secret databases available to foreign IT workers.
READ ALSO: IT workers in other countries had access to secret Swedish records: report
Some had speculated that the entire Red-Green government, comprised of the Social Democrats and the Greens, would step down, or that Löfven would call a new election. Instead the PM opted for a third option: a cabinet reshuffle.
The reshuffle came as no surprise to Li Bennich-Björkman, professor of political science at Uppsala University, however. She told The Local the other two options would have been disproportionate given that Sweden has a general election coming up in September 2018.
“A new election is something no-one would have wanted right now, definitely not the government,” Bennich Björkman said.
She added that for the entire government to resign over the no-confidence motion would have been a “completely inadequate” response.
“For ministers to be exposed to criticism and to be let go, that happens, and it happens relatively often,” Bennich Björkman said. “Now, there are other people taking on their tasks.”
But will this not make the government appear weak in the year leading up to the 2018 election?
“Perhaps they will for a little while. But they're avoiding a deteriorating situation,” Bennich Björkman concluded.
Nicholas Aylott, associate professor of political science at Södertörn University in Stockholm, had been less certain of the outcome, but judged that Löfven's cabinet reshuffle was an appropriate response to the opposition's no-confidence motion.
“It's a clever move. It concedes some ground to the opposition, but it doesn't involve total capitulation. Probably more importantly, to use the tennis metaphor: it hits the ball back into the opposition court,” Aylott told The Local.
The Alliance parties announced on Thursday afternoon that they would push ahead with the no-confidence motion against Defence Minister Hultqvist as planned, as would the nationalist Sweden Democrats, who have launched two previous motions against the current government.
READ ALSO: The Swedish no-confidence motion explained: who's involved and what it means
But given that the Alliance is made up of four parties with differing interests, a rift could emerge between them now that they have in part achieved their goal, taking down two of three ministers.
On Friday morning, a source within the Liberals's group in the Riksdag told TT newswire the party could well withdraw from the motion against Hultqvist, stating that the defence minister “should not even have been part of it from the beginning.”
“The Sweden Democrats will almost certainly refuse to back down, they have no reason to. As you get into the Alliance, each of the Alliance parties' calculations become more difficult,” Aylott commented.
Do you think Hultqvist will be able to stay on?
“Probably. If I had to guess, I would be surprised, actually, if the entire Alliance, and Sweden Democrats, were still prepared to pursue him and try to remove him from his position,” Aylott said.
READ ALSO: Could breakdown in opposition relations bring a new political climate in Sweden?
According to Aylott, the outcome of the past week's political turmoil could possibly be seen as a 1-1 draw between the government and the Alliance. But when the dust settles, everyone will presumably begin to remember that something went wrong in the way Löfven's government worked, he said.
“There's an awful lot that hasn't really received any sort of plausible explanation yet in the whole saga. And it may be that more revelations become more damaging to the government,” Aylott noted.