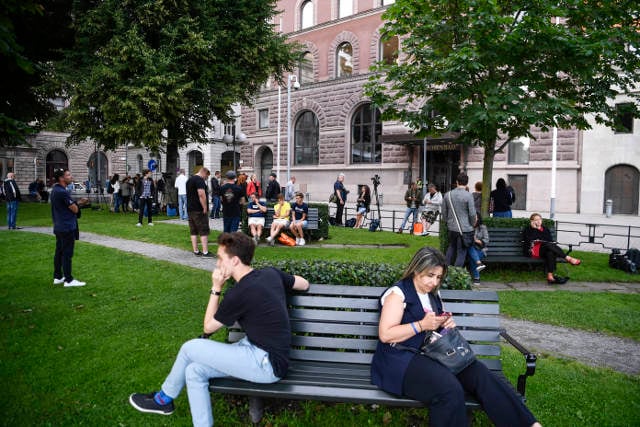 Journalists and the public waiting outside the Rosenbad government offices. Photo: Vilhelm Stokstad/TT

The four leaders of the Alliance parties announced the plans for the motion at a snap press conference on Wednesday morning, saying that Defence Minister Peter Hultqvist, Interior Minister Anders Ygeman and Infrastructure Minister Anna Johansson “neglected their responsibilities” when a transport data leak made top secret databases available to foreign IT workers.

Soon after Löfven called the country’s government to an emergency meeting at the Rosenbad offices in central Stockholm, and while Swedish media reports suggested he would detail his response on Wednesday, after a long day of waiting, the PM’s press head Odd Guteland finally announced that a press conference would rather be held on Thursday morning.

“We’re in no hurry with this,” he told journalists outside Rosenbad.

The massive leak of confidential information that sparked the current situation stems from the Swedish Transport Agency's hiring of IBM in 2015 to take over its IT operations.  IBM used subcontractors abroad, making sensitive information and an entire database of Swedish drivers' licences accessible by foreign technicians who did not have the usual security clearance.

Though it is not yet known if it caused any harm, it is one of the largest breaches of government information in Sweden in decades.

What exactly Löfven’s next move will be has been the subject of intense speculation in the last 24 hours. The resignation of one or more of the ministers involved or calling an early election are two options Swedish media outlets have floated.

In Sweden calling an early election does not negate the need to hold the previously scheduled election however, so that would mean the country having two elections in the space of a year: the hypothetical early (or “extra” as it is known in Sweden) election, and the already scheduled general election in September 2018.

A third alternative could be to announce the resignation of the government without an election, which would then mean the responsibility falls on the opposition to try and form a new government and have it confirmed by the speaker of the Swedish parliament. The potential for Sweden to be thrust into political chaos by such a move means it would be a gamble however, particularly with the 2018 election looming nearer on the horizon.

For the moment, Sweden is left waiting to find out what the PM's solution is. He is expected to detail it at a 10:00 press conference.