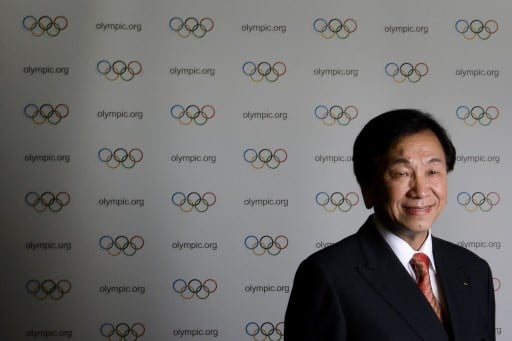 Aiba president Wu Ching-Kuo. Photo: Fabrice Coffrini/AFP
Security guards have been blocking access to the Aiba offices in Lausanne.
A notice pinned to the door and signed by an interim executive committee said that a motion of no confidence had been called against Taiwan's Wu.
Aiba, which organises amateur boxing including Olympic competitions, has been struggling with instability and financial difficulties.
In a statement issued on Tuesday, Aiba had said that an extraordinary congress would be held within the next three months.
“Dear Aiba employees. Please be informed that the Aiba executive committee have passed a motion calling for a vote of no confidence in the current Aiba president, Wu Ching-Kuo,” the notice said.
“In addition, motions were passed enabling the establishment of an interim management commitee (IMC) to manage the work of Aiba and Aiba headquarters and the organisation of the extraordinary congress.
“Consequently in this moment of transition it has been decided to close the office for the remainder of this week. The staff are being offered these three days as holidays.”
Wu, who has been head of the federation since 2006, is blamed for causing financial irregularities by his opponents, who believe Aiba is on the brink of bankruptcy.
Later on Wednesday, the Aiba blasted what they described as attempts by the executive committee “under the unrecognised 'Interim Management Committee', to attempt to illegally seize control of the organisation's headquarters”.
“Their actions have not only prejudiced the operation of Aiba and the livelihoods of all of its employees, but threaten the forthcoming Aiba World Championships in Hamburg,” said a statement released to AFP.
“A representative of this committee has since been removed from the premises by Swiss police, but Aiba's headquarters must now remain closed pending the decision of the relevant authorities.”
The International Olympic Committe (IOC) said it was monitoring the controversy at the Aiba with whom it has been at loggerheads over doping procedures, scoring systems and financial management.
After receiving a number of assurances over these sticking points, “the IOC released the Aiba payment (from the 2016 Rio Olympics) which had been held back,” the IOC told AFP.
“Following the decisions of the recent Aiba Executive Committee meeting on 24 July 2017, the IOC is seeking more information, to be able to determine whether further action is required within its remit.” 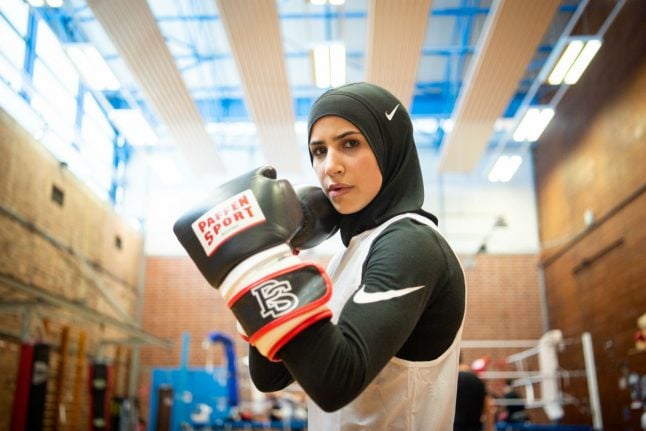 Today, the 21-year-old, who discovered female boxing by watching online videos as a teenager, is a German amateur featherweight champion and dares to dream of Olympic glory.

Her path so far took all the determination she could muster, Nassar told AFP, sipping an iced coffee at a cafe in Berlin's Kreuzberg district, where she grew up.

“It was as if I had to prove twice as much because not only am I a woman who boxes, but I also wear the headscarf,” she said, during a break between gruelling training sessions.

“In the end it made me stronger,” she laughed, her made-up face known to countless Instagram fans framed by a pastel-coloured floral headscarf, sunglasses perched on top.

Next year's Tokyo Olympics and then the Paris Games in 2024 “are my great dream, my great goal,” smiled the young woman. That dream only came within reach in February, when the International Boxing Association (AIBA) amended its rules to allow Muslim boxers to wear a hijab and fully cover their bodies in the ring.

When it comes to qualifying, “now the prerequisites are the same for all,” said Nassar, who in training and in competition wears the head covering as well as a full-length top and leggings.

“Only sporting performance should count. We must not be reduced to our external appearance.”

Her list of achievements already includes six Berlin titles in the featherweight category, and the 2018 German Championship title.

In 24 official fights, Nassar, who weighs 57 kilos, recorded 18 victories, including one by KO, which is rare in this category.

“My boxing style is very unconventional but I'm super fast. It's my strength,” she said, mimicking a few uppercuts and hooks.

“For my opponents it's very unpleasant to box against me,” she laughed.

But for many years, the education and sociology student could not compete in international fights because of her attire.

This year, the German Boxing Federation, which had changed its own rules in 2013, put forward Nassar for the European Under-22 Championships, which however barred her due to her outfit.

Nassar, who also speaks Arabic and regularly travels to Lebanon, her parents' country of origin, said it never occurred to her to take off her hijab for boxing.

“Why should I have done that?” she said. “For me it has always been clear that I would fight with my headscarf.”

In Germany, the wearing of the headscarf tends to be widely accepted on the grounds of religious freedom. Nassar outside of the Berlin boxing hall. Photo: DPA

The fight isn't won yet, however.

The Berliner's Olympic ambitions, like those of other sportswomen wearing the headscarf, run up against critics who brandish a rule for the Olympics prohibiting the display of any political, religious or racial symbols.

“Even if the boxing association, like most federations, has given in, the Olympic Charter has not changed,” argued Annie Sugier, president of the International Women's Rights League.

Criticizing the participation in the Olympics of countries such as Iran and Saudi Arabia whose sportswomen have to be covered “from head to toe”, Sugier called hijabs in sports “sexual apartheid”.

In France in April, Iranian female boxer Sadaf Khadem won her first official fight dressed in shorts and a vest.

Despite the controversy surrounding the hijab in some Western countries, sportswear giants have already begun offering less skin-revealing clothes to cash in on the “modest fashion” market, which is now worth hundreds of millions of euros.

Nassar is a brand ambassador for US sportswear maker Nike, which has been marketing a sports hijab for nearly two years.

The female boxer, who is very active on social media, has become a role model for young Muslim women in particular.

“If you want to get to the top, you have to fight,” read a recent message by the boxer.

“Nothing is simply a gift. Accepting challenges and growing beyond them. And don't forget to smile.”

Before leaving the cafe, she posted a new picture of herself on Instagram and told AFP: “I want to show people that anything is possible if you fight for it.”

Nassar's picture was also used in a poster campaign to mark the 70th anniversary of the German constitution, the Basic Law.

It promoted Article 4, which states that “the undisturbed practice of religion shall be guaranteed”.