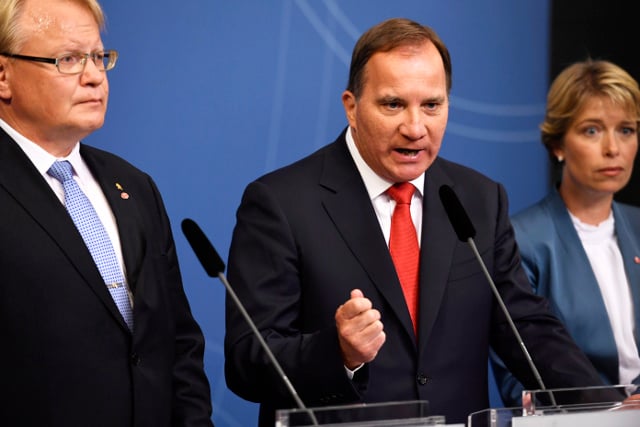 “I don't want political chaos. I want to take responsibility so that the country doesn't end up with political chaos,” Löfven said to journalists in Stockholm.

Johansson is replaced by Tomas Eneroth, while Ygeman's duties as Interior Minister will be handled by Justice Minister Morgan Johansson going forward. Defence Minister Peter Hultqvist, who was also subject to the no-confidence motion, will continue in his position.

Löfven labelled the no-confidence motion against Hultqvist as “completely irresponsible” and noted that he “is Defence Minister in my government. He does not have responsibility for the authority where the shortcomings occurred”.

Citing anonymous government sources, tabloid Aftonbladet said that Löfven's strategy in keeping Hultqvist in place is to make the motion more difficult for them as he is popular among the centre-right.

But Christian Democrat leader Ebba Busch Thor suggested the opposition would be unwavering, writing on Twitter that “confidence in the Defence Minister is exhausted. The Prime Minister is not taking responsibility – as such we'll ask for responsibility in the Riksdag”.

On Thursday afternoon, the Alliance parties jointly announced they would push forward with their no-confidence motion against Hultqvist.

In a further change, Heléne Fritzon will take over as Migration Minister meaning Morgan Johansson is no longer responsible for migration issues as was the case before, while Löfven also announced that Health Minister Gabriel Wikström will leave his position for health reasons, with Social Security Minister Annika Strandhäll taking over his duties.

The PM called the country's government to an emergency meeting at the Rosenbad offices in Stockholm on Wednesday after the four leaders of the Alliance parties announced their plans for the motion that morning. But while it was expected that the PM would respond at some point during the day, it was instead left to wait until Thursday morning.

Justifying their reasoning for the motion of no-confidence, the Alliance leaders said that Defence Minister Hultqvist, Interior Minister Ygeman and Infrastructure Minister Johansson “neglected their responsibilities” when a transport data leak made top secret databases available to foreign IT workers.

The massive leak of confidential information stems from the Swedish Transport Agency's (Transportstyrelsen) hiring of IBM in 2015 to take over its IT operations. IBM used subcontractors abroad, making sensitive information and an entire database of Swedish drivers' licences accessible by foreign technicians who did not have the usual security clearance.

Though it is not yet known if it caused any harm, it is one of the largest breaches of government information in Sweden in decades.

Defenders of Löfven's government have pointed out that the outsourcing of Transportstyrelsen's IT operations started during the mandate of the previous Alliance government, led by then Moderate leader Fredrik Reinfeldt and featuring current Centre Party leader Annie Lööf as Enterprise Minister.

Now former Interior Minister Ygeman made a short statement through Twitter in response to the news that he will no longer continue in his position.

“I want to thank all police officers, firefighters, prosecutors and coastguards. It has been an honour and privilege  to work with you for a safer Sweden.”

PM Löfven has proposed that Ygeman should take over as the Social Democrat group leader in the Riksdag.