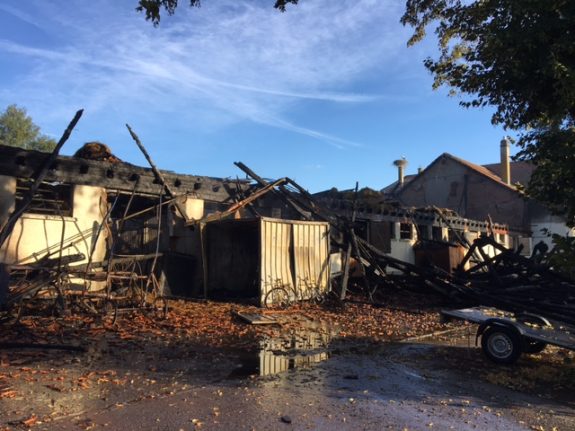 The stables destroyed by fire. Photo: Vaud police
The suspect was arrested on Friday as part of the investigation into the seven fires that ravaged barns, fields and buildings including a stables at the National Equestrian Centre (IENA) in Avenches.
At the time police confirmed they were treating the fires as criminal acts.
On Friday Vaud police said they had arrested one person, but gave no further details.
However it was widely reported by Swiss media that the suspect was a volunteer fireman who helped extinguish the fire at the riding school.
According to 20 Minutes, the man, in his 20s, was hailed for his heroism and bravery as he tackled the flames and expressed his devastation that he was unable to save the 24 horses.
A witness who spoke to 24 Heures said the man was even upset at the thought that his own horse may be inside the building.
After the fire, the man’s behaviour aroused the suspicions of employees of the riding school, said both papers.
“He said and did too much,” a source told 20 Minutes.
Police said they had requested the suspect be detained while the investigation is ongoing.
“The presumption of innocence prevails, and in the interests of the investigation no further information will be given,” said the statement.
Url copied to clipboard!