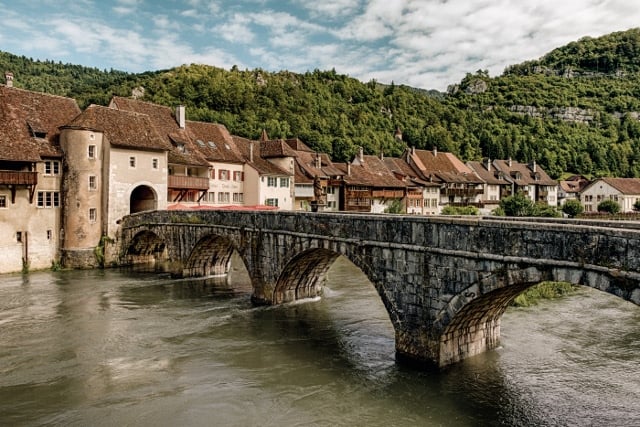 The lovely town of St Ursanne in Switzerland's Jura canton. Photo: Photo: Ivo Scholz/Swiss Tourism
Aargau: Lenzberg Castle
Lenzburg Castle. File photo: Depositphotos
With a history dating back a thousand years, Aargau’s Lenzberg Castle is well worth a visit. Also known as the Dragon Castle, this 'Schloss' comes complete with its own dragon’s lair, a drawbridge, a knight’s hall and picnic-worthy gardens. A great day-trip, with a fantastic kids’ playroom where you can dress up as knights, ladies and dragons too, of course!
Appenzell Ausserrhoden: Säntis
Idyllic Apenzell with the Säntis in the background. Image: Depositphotos
The small half-cantons of Appenzell Ausserrhoden (traditionally Catholic) and Innerrhoden (traditionally Protestant) make up the picturesque region of Appenzellerland.
When visiting Ausserrhoden, you can’t go past (literally) its resident mountain, Säntis. An impressive peak reaching to 2,501m, Santis is the tallest mountain in the Alpstein massif. Catch a cable car (or hike) to the top and gaze out over neighbouring cantons Appenzell Innerrhoden and St Gallen or over Lake Constance.
Boys from Appenzell in traditional costumes. Photo: AFP
It is said that on a clear day that you can see six countries from the top of the Säntis: Switzerland, Germany, Austria, France, Lichtenstein and Italy.
Plan B: Appenzell cheese factory
Sample one of Appenzellerland’s most famous local products with a trip to the Appenzell cheese factory and museum.
Appenzell Innerrhoden: Berggasthaus Aescher Photo: Aescher Alpstein
An Instagram staple, Berggasthaus Aescher gives new meaning to the term “destination restaurant” – even when that is not always positive news.
Located a cable-car ride and short hike from Wasserauen, Aescher is built right into the cliff face and clings dazzlingly to the side of the Ebenalp mountain (if you go inside, you’ll see the back wall of the hotel is actually living rock). It's open May to November.
Basel-Landschaft: Augusta Rurica This Unesco-recognised event is Switzerland's oldest and largest wine festival and – to make it even more special – it is held a maximum of five times every century.

Last staged in 1999, the Fête des Vignerons has its origins in the 17th century when the Wine Guild held a yearly pageant in Vevey, which is located at the foot of one of Switzerland's oldest wine-growing regions, the Lavaux.

The Roman Signer sculpture, Kunsthaus Zug. Photo: Olivier Baer, Zurich
Zug has both new and old attractions. The Old Town of the canton capital (also named Zug) is very pleasant for a stroll – don’t miss the clock tower – and once you hit the shores of Lake Zug, you’ll spot the stylish, modern Roman Signer lake view sculpture, which you can enter for a duck’s eye view of Lake Zug.
Zürich: Uetliberg
The view from Zurich's Uetliberg. Photo: Christof Sonderegger/Swiss Tourism
Zurich’s ‘home mountain’ provides panoramic views across Switzerland’s largest city and its lake, all the way to the Alps in the distance on a clear day.
Plan B: Swimming in Zurich
If the weather allows, go jump in the lake! There’s hundreds of spots to swim in the fresh, clear waters of Lake Zurich and its fast-flowing offshoot, the Limmat River.
A version of this article by Claire Doble first appeared in The Local in 2017. Read about her Swiss travel adventures on her blog. 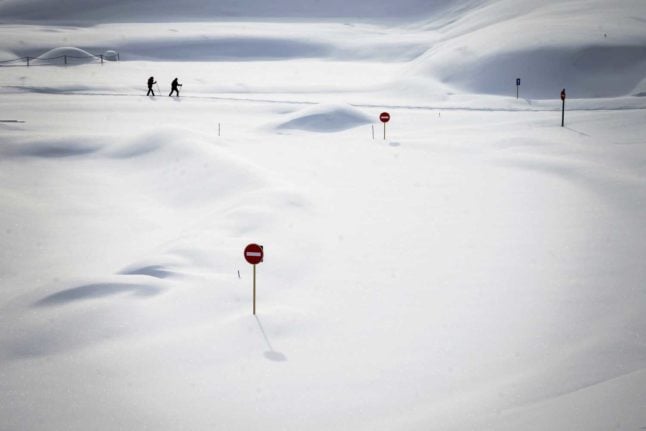