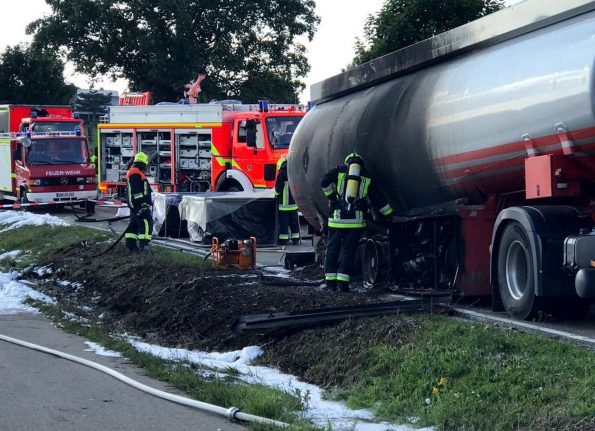 The truck outside Schrobenhausen on Monday. Photo: DPA

The driver reacted bravely after his truck, carrying 35,000 litres of diesel and petrol, caught fire near the Bavarian town of Schrobenhausen on Monday. The cause of the fire is believed to have been a burst tyre.

The driver got out of his cabin and attempted unsuccessfully to quell the flames.

Aware that the vehicle could explode, the driver notified the fire services, and then got back in his truck to drive it to an uninhabited area.

Fire services warned locals to keep their doors and windows closed. Meanwhile 100 fire fighters followed the truck out of town, where they were able to dampen the flames on a quiet country road.

Police said that nobody had been hurt during the incident.

The truck driver won praise in the German media when news of his actions emerged. Bild Zeitung described his actions as “heroic.”