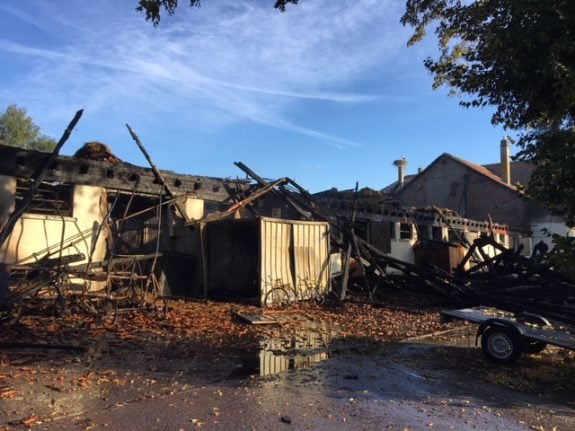 The destroyed stables. Photo: Fribourg police
A number of fires broke out in Domdidier, St-Aubin and Avenches in the early hours of Saturday morning, according to a statement from Fribourg and Vaud cantonal police forces.
Two fields of barley were on fire across an area of 2,000m2, as was a barn and stables at the National Equestrian Centre at Avenches (IENA).
Three others fires were reported in the area at the same time concerning agriculture machinery, another barley field and hay bales, between 00.30am and 1am, said police.
Despite the efforts of the fire service, the barn and the stable where horses were present were completely destroyed, with many animals trapped inside.
The family who lived on the premises were able to escape, and no person was injured in the fires.
However many horses and ponies perished. Police put the figure at around 15, but IENA director Jean-Pierre Kratzer told 20 Minutes that 23 animals had died.
Two horses were found alive and were taken to an animal hospital in Bern, reported La Tribune de Genève, however one had to be put down after suffering from severe smoke inhalation.
Police have opened an investigation into the fires.
“In light of the circumstances, a criminal act is suspected,” said the statement.
One of the fields on fire. Photo: Fribourg police
The people of Avenches and the riding school have been left devastated by the events, said the Tribune.
Speaking to the paper, Kratzer said it was an attack on the school’s values but vowed to rebuild the centre as quickly as they could.
“Whoever did this is not from the equestrian world. It’s organized terror,” he said.
Vaud and Fribourg police have launched an appeal for witnesses. Anyone with information is asked to call 021 333 53 33.