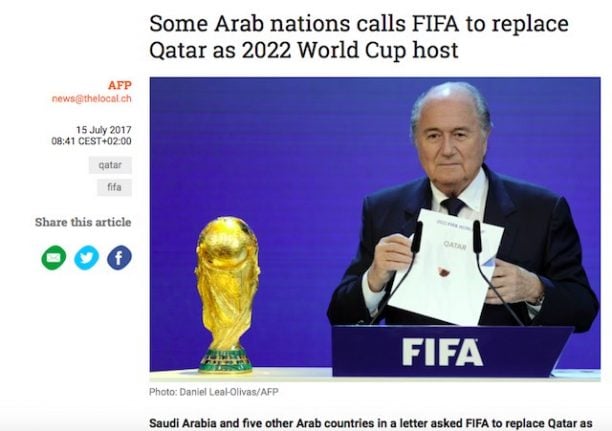 The fake story as it appeared on a site set up to look like The Local.

The article claimed that Saudi Arabia and five other countries had sent a letter to football’s Swiss-based governing body, FIFA, calling Qatar a ‘base of terrorism’. It also included fabricated quotes from FIFA president Gianni Infantino, in which he said Qatar might indeed be stripped of the hosting rights.

The fake story was widely reported in the international press, with Reuters, the Telegraph and ESPN all running reports quoting The Local. The Local was contacted by journalists from Qatar-based Al Jazeera and the BBC querying the story.

However, an investigation by The Local quickly revealed that the article had never in fact been published on The Local. Instead, it appeared on a site that aped The Local Switzerland.

The sophisticated copycat site included links to genuine articles and adverts on The Local, and was designed to resemble the real site to anyone who was sent a link to the fake article. However, the website address was substantially different to The Local’s genuine URL. The article contained numerous language errors indicating it was not written by a native English speaker.

It is not yet clear how the article gained the attention of journalists.

At some point over the weekend the article was removed and visitors were redirected to The Local Switzerland’s genuine ‘page not found’ page.

As soon as the incident came to light, The Local put out a statement on Twitter from co-founder James Savage:

“Our investigation so far indicates the article appeared on a fake site designed to look like The Local, and never appeared on The Local's own site. There is no trace of it in our systems, nor any evidence that anyone tried to access our content management system.

We naturally condemn in the strongest terms any attempt to abuse The Local’s brand to spread disinformation.”

Reuters and the Telegraph, among others, have now removed their articles. Reuters has issued a correction.

Qatar has been the subject of other recent fake news reports. On May 23rd, a report apparently from the state-owned Qatar news agency falsely attributed remarks to the state’s Emir that appeared friendly to Iran and Israel and which questioned how long Donald Trump would remain US president.

CNN reported in June that an FBI investigation showed Russia had hacked the news agency. However, the Washington Post reported on Sunday that US intelligence sources blamed the United Arab Emirates. Analysts said the hack was an attempt to sow mistrust of Qatar among its neighbours, particularly Saudi Arabia.